2010 Tevis: Mark the Trail and They Will Come 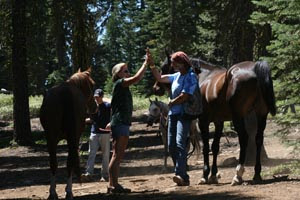 There's nothing easy about the Tevis trail. It's a hundred miles of rock, dust, elevation, uphill, downhill, (approximately 19,000 feet of climbing and 22,000 feet of descending), tall mountains, plunging canyons, rivers, wilderness, heat, humidity, effort, and luck - good or bad. You can never relax or let up. You have to keep on the move, and fast, for 100 miles, despite the rocks and boulders and bogs and cliffs and weather and fatigue. It's an arduous ride for a horse and rider. They come for many reasons: for fun, for the challenge, for the beauty; to test their horse or themselves; to finish, to win, just to try; to party, to conquer fear, to conquer the trail.

Joyce Sousa and her daughter Jennifer Neihaus came for the challenge. 17-year-old LV Integrity (Ritzy) and Joyce finished the Tevis in 2001 (19th place) and 2006 (6th place); 15-year-old MC Gallantly (Gallo) and Joyce were pulled from the Tevis in 2005.

These are a couple of iron horses. Ritzy has over 6000 miles in 12 seasons. Only 3 pulls in 103 starts. 25 hundred-mile completions (24 in the top ten, 6 wins). Gallo has 4700 miles, 81 completions in 90 starts over 9 seasons. (Between the four of them, they have over 38,000 AERC endurance miles!) Always, Joyce rides Ritzy according to his ability for the day, and she knows how to pace Gallo by watching him move beside her.

Several hundred-milers - including Tevis - were the goals for the Sousas this year, until both horses were pulled for lameness at the April Git R Done ride - a very unusual occurrence. Ritzy had fallen down in his pasture in March; after Git R Done, a chiropractor found him way out of whack in the hind end, and adjusted him. Jennifer thought Gallo might need more rest between rides, after Joyce had mentioned that Gallo uses a lot more of himself out on the trails - he's not as an efficient mover as Ritzy. And that's how they came into Tevis this year, by accident and by choice, with more rested horses. "Maybe that's the key," Joyce said. "I feel really good about this ride."

The more time off for the horses agreed with Jennifer, since she broke her tailbone 2 months ago, and she'd only ridden 4 times since then, including Friday's warm up ride on the Tevis trail. "We are so blessed to be here," Joyce said. "These horses are gifts." Husband and father Dennis, crew extraordinaire, would, as usual, be crewing for the two of them. 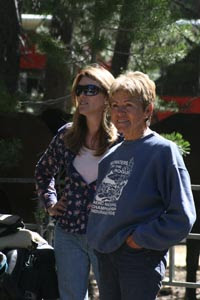 "It's a blessing to be here," echoed Sue Hedgecock of Park City, Utah. "Every ride is a blessing." Sue would know, since she was out of the saddle for some 8 years battling nonhodgkins lymphoma. (See Sue's profile.) "My horse (Alburuke) was ready, and I just decided last week to come." Carla Richardson and SS Kharady Khid came to ride Tevis, "because you only live once." She really couldn't afford it, "but I decided what the hell." When she pulled into Robie Park on Thursday, she had a little panic attack. "What am I doing here - I don't belong here!" she thought. She was able to calm her nerves on and off, concentrating on what Christoph Schork - who was trimming her horse's feet - said: "It's just a trail!" It is... but then it's not. This will be the first 100 for both of them. Jack Evers and Baraka Musaadi of Wyoming were back to beat the trail that beat them last year. They took a wrong turn near the finish - so near - but by the time they found their way back onto the correct trail in the dark, and across the finish line, it was just after 5:15 AM - cut off time. 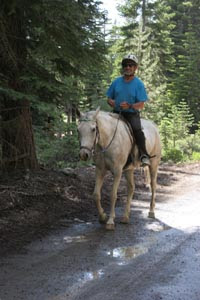 Barbara White describes what it is about the Tevis that keeps her coming back year after year - as in 39 years. "It's an honor to ride it. I really really love the ride. It's a spectacular trail; I love the bond you have with your horse after a hundred miles; I love the people, the history; and the volunteers are beyond compare - you get spoiled at this ride." Barbara would be going for her 3000 mile buckle - that's 30 Tevis finishes this year, on Canadian Brook - his first 100 mile ride. Her dad Bob and mom Julie Suhr (22 Tevis buckles) - the 'First Lady of Endurance' - would be there rooting for her. John Crandell, of Star Tanney, Virginia, was back on the Tevis trail because he has a phenomenal horse in Heraldic. John calls Heraldic "A freak of nature" - and not just because of his record, which is impressive enough. The 12-year-old horse has finished 8 of 9 100-mile rides, winning 7 of them, including the Tevis in 2006 (and the Haggin Cup - Best Condition), and the AERC National championships in 2006 and 2007. What makes him a freak is that he has come back from a serious injury. He fell in his paddock in the fall of 2008, skinning his stifle to the bone. He spent several months non-weight bearing, and 1 1/2 years of rehabbing. When Heraldic won the Old Dominion last month, after almost 3 years off from endurance rides, John knew he had his old horse back.

Heraldic is not an easy horse to ride. He's hot, and he uses so much energy, John has to continuously work on him to keep his head down and not up in the air. "You have to ride him for 100 miles. You can't be a passenger."

Watching Heraldic trot out at the vet-in on Friday took my breath away, and several other people around me. Melissa Margetts was back to ride the Tevis for the third time because she was highly motivated: she was told she might not ever walk again, and she certainly wouldn't ride. After getting bucked off a horse in an arena last fall, then getting unceremoniously jumped on, her leg was broken in enough pieces that the news was grim, even after a couple of surgeries. To keep herself from getting too depressed, she signed herself up for an unfathomable goal: Tevis. (I'm pretty sure she didn't tell her doctor.) She'd be wearing a leg brace and packing a collapsible cane; she had her horse taught to lay down if she had trouble getting off or on. And her horse Cabo? Only the first Paso Fino to finish Tevis, and he was going for his third buckle, too. 20-year-old Victoria Saiita of Ranch Palos Verdes, California, and her 10-year-old mustang Lakota were there for their first Tevis try. "I'm so excited - every once in a while it hits me!" Vicky got Lakota when she was 5 - "She was a bit of a handful at first, but once we bonded, I could do anything with her." Nicole Chappell was here to conquer some demons. In 2006 she was pre-riding her talented horse Rebel Fire Bask on the Tevis trail when the horse was spooked and both of them went off a cliff. "I watched him slide down... that's the last I saw of him..." This is her first Tevis since then - she just has to get past those cliffs (and there are a lot of cliffs in this ride.) This year she is riding a beautiful golden part Arabian/Quarter horse/Friesian named Golden Knight - who is blind in his left eye. She's pre-ridden him on the Tevis trail, "He knows the cliffs are there." Nicole's mom Pat is also riding - for her 18th buckle. She rode the horse Thunders Lightning Bar (a Quarter horse!) who holds the record for most finishes - 13! When Japanese businessman Seiichi Hasumi saw a documentary in Japan on the Tevis Cup in 2002, he decided that he wanted to ride the Tevis Cup himself. Nevermind that Mr Hasumi was 59 and had never ridden a horse before. Ann and Hal Hall of Auburn, California, got Mr Hasumi started down the endurance trail; and a year later, Mr Hasumi had ridden in and finished his first Tevis. Mr Hasumi has in fact finished Tevis six times in a row and would be going for his 7th buckle, despite the fact he had a cold and wasn't feeling too good. For Hal Hall, it all started with the Tevis. "I grew up with it; it was the center of my universe for some time." It's still the center: Hal will be riding for his 27th buckle. He and his mount Dreamm On made it just past the river crossing last year, 3/4 of the way through the ride, before Dreamm On was pulled for lameness. And then there's Steph Teeter. She first rode Tevis back in 1997, on her big hulking black Orlov Trotter, Nature's Khruschev - a most unlikely looking 100-mile horse. Krusty was 6 and it was his first 100. They finished - and Krusty went on to finish 7 of 10 100's, including a World Championship in France in 2002. Since then, Steph has never had a hankering to do Tevis again, and in fact, we'd just talked about that two weeks before Tevis, when Nance offered me her horse Quinn to ride again. "I'm pretty proud of my 1 for 1 record, and Julie Suhr handing me my silver buckle - that will do me for a while," I said, and Steph agreed.

Until the week before Tevis, when it suddenly popped in her head that she wanted to ride Tevis on Rhett. 19-year-old Rhett was at 4975 endurance miles, and if he finished he'd reach his 5000 miles in Tevis; he was in fine physical shape; he was well rested; he'd do the ride in Easyboot glue-ons (if you finished, the ride entry was paid for by Easyboot if you wore their boots; and Rhett moved well in the glue-ons); she could get a trailer ride from Nance and Bruce; and she had me and Bruce to help crew... it all just felt right.

And so they came to the Tevis trail again, 182 of them, for different reasons, but with the same goal: reaching Auburn, California with a sound horse by 5:15 AM Sunday.