The rancho on the creek has erupted. Upset horses. Change in the air.

Steph and John left for a winter in Arizona this morning, with Rhett and Sophie in the trailer. Princess is also on the trailer because she's going to a new home a few hours east. (The other horses left behind are actually quite matter-of-fact about the winter Snow-Horse migration... and since Princess had plenty of food in her stall in the trailer, she appeared to be indifferent about the weaning.)

It started out with a few baby whinnies for the missing Mama - after all, Smokey often wandered far away from Princess. However, as an hour ticked by, with no sight or sound of Mama, Smokey began to get worried. The whinnies increased, the frequency and the urgency; and she began trotting around her pen, looking over and through the fences. Huckleberry occasionally walked after her to check on her; Stormy just ate. When Smokey gets upset, she wants to nurse. She was upset. She tried to nurse Huckleberry. He wasn't too sure about that, and he finally pinned his ears and shoved her away. Smokey ran herself tired in the cold morning, smoke puffing briskly out of her nostrils. Run, stop and whinny, listen, run some more, whinny some more. Kick the hay feeder in frustration. Pin her ears. Whinny. Check every corner of the pen, every fence line. Run some more. 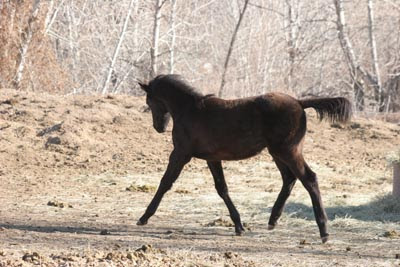 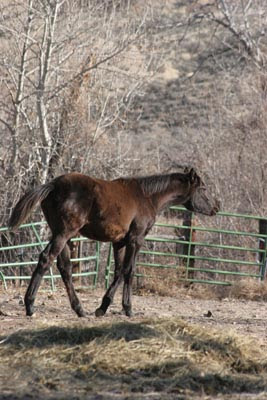 Many hours later, she's still walking about - between mouthfuls of hay - and whinnying. She's tried to nurse off Jose and Kazam, who joined them in the pen tonight; Jose had to keep biting her in the hind leg.

The uncles are of no comfort; I am no solace for a lonely abandoned baby. It's the next step in Smokey's life, on the path to growing up, but there's something sad about it. I hear Princess hasn't uttered a single whinny all day. Posted by The Equestrian Vagabond at 5:51 PM

There is something very sad about a horse being weaned. Then add abandonment. Have to wonder if this is how equine juvenile delinquency starts. Hopefully tomorrow there won't be graffiti on the barns!

Well...Princess likely feels about Smokey about how I feel about my 16.9 yr old....love 'em...but not too upset when they are out of sight..:)

I can't help wondering why we wean babies when we do? Smokey is a bit older than 6 months, right? Our only foal stayed with her mama for 13 months simply because we had no reason or method for separating them. By the time we took my mare home she'd already weaned her filly who didn't even call out when we left. She hung out with her chosen gelding.... On the other hand, I've heard of two-year-old "babies" who went berserker upon being separated, so I guess a delay doesn't always reduce the trauma. At any rate, Smokey sure looks strong and healthy--tell us when she cheers up so we don't have to fret....