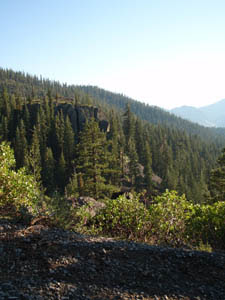 This road does not consist of preparation. See my Tevis How-To Tutorial. It's a short road that does consist of second guessing, second thoughts, and a healthy case of nerves.

I wasn't offered a horse to ride by Nance until the Monday five days before Tevis, I didn't give her a definitive 'yes' until Tuesday evening (they were leaving early Wednesday morning, with one horse or two). I didn't fax my entry until Wednesday noon, and the Tevis office didn't get it, so technically, I did not officially enter Tevis until about noon on Friday.

The first panic attack came on Thursday when I was an hour into my 8-hour drive from Oreana, Idaho, to Robie Park near Lake Tahoe in California. "WHERE'S THE RAVEN!?" I couldn't do an endurance ride without the Raven in my saddlebag, (the Raven has close to 3500 endurance miles), and there was NO WAY I'd ride Tevis without the Raven! I whipped off the highway, opened the trunk, threw things out of bags into the air, onto the ground, and - sigh - there was the Raven, already calmly sitting in his ride bag. Whew.

Onward on the long hot drive across Oregon (55 mph speed limit! boring!), and Nevada. Plenty of time to think about everything, and get nervous. And I was nervous, because there was nothing else to do but drive and think about what I had now heaped on my plate.

And I was so grateful that I hadn't had the time for weeks or months to dwell on everything, to psyche myself up, or psyche myself out. I did, starting Monday, stop reading about scary trails and heat and bees, slickrock, dust, horses and people falling off cliffs, and getting pulled at the Quarry at 95 miles. I stopped wondering about the price of knee surgery and I stopped reading about how to recognize and deal with heatstroke. I stopped asking people I interviewed what the worst parts of the trail were. I'm not afraid to die; I am afraid to get hurt again. And I'm afraid of hurting somebody's horse.

So I pretty much ignored the whole thing until this drive to Robie Park. I figured by this point, being ignorant of what was ahead of me was an advantage. 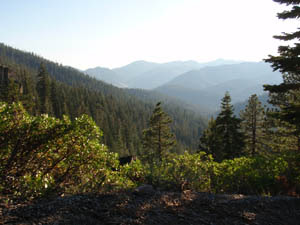 But once I turned off Highway 267 onto the Mt Watson road leading along the ridge into the forest toward Ridecamp, 8 miles into the mountains that were layered against the evening western sky, into a pine forest that had just had a fresh rainfall, (hailstorm, in fact), everything melted away. These were my mountains I'd spent 9 years in, the forests that have gotten into my blood. I've ridden, hiked, camped, climbed peaks, horse packed, and worked in the Sierra Nevadas, and I was coming back to do another endurance ride here. This just happened to be the Tevis Cup endurance ride - something I never really thought I'd do - and I'd said YES, and I was coming to have fun and ride with friends; and as far as I got (as long as I made it at least to Robinson Flat, at 36 miles), I'd be happy with everything I'd done.

Another Idahoan Max Merlich and his mule Junior were here - they'd attempted Tevis in 2007 but were pulled. Junior had cramped up in his hind end at one of the vet checks - something he'd never done, and Bruce knew he'd screwed up in electrolyting Junior. He changed things and got it figured out - he was confident they'd do better this time.

I saw Far - Kevin's horse, but Kevin and Rusty and Bill were off somewhere. Kevin texted me later, "Are you coming over?" I found them in the dark and big hugs went all around. Kevin was a wee bit nervous, but I was rather ecstatic to report that all my nerves really were gone.

Nance and Bruce were parked at the far end of camp, next to fellow Idahoans the Yosts. Chris Yost rode and finished in 2007 with Nance on Quinn. Chris was crewing for his wife Kara this year (and we think he was more nervous than Kara). It was Kara and her horse Jack's first Tevis. Their daughter Laura was riding (she finished Tevis in 2006), and would be escorting her 13-year-old daughter Chandler on her first Tevis - with Chandler riding the horse that finished with Laura in 2006. Three generations of Yosts. Chandler was nervous... but excited. Laura's husband Gentry was crewing for those two. They gave me a yellow Team Endurance shirt to wear with them - I was an honorary Idaho endurance potato for the weekend. Five riders, three crew people... our crews would be busy on Saturday!

Jasbo and my mount Quinn had their noses buried in hay. We all visited, relaxed, ate, drank, did some minor rearranging and packing, enjoyed a blazing orange sky sunset, and went to bed early. Stocking up on sleep for the long sleepless weekend coming up!

Just before falling asleep in my tent under the mountain stars in the cool air, I read the chapter "Pegasus" from Julie Suhr's book Ten Feet Tall, Still. It's her magical account of the Tevis ride.

Nothing better for inspiration before setting off on my own unexpected Tevis adventure. 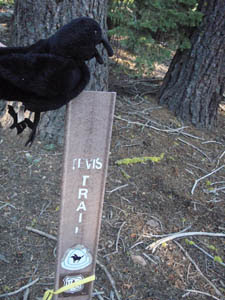 Here's the Tevis page on Endurance.net:
www.endurance.net/international/USA/2009Tevis
Posted by The Equestrian Vagabond at 10:24 PM