Since basecamp for the Eastern High Sierra Classic is in Jackie's pasture, her horses are either penned up, tied up, or moved elsewhere starting Thursday of the ride, through Sunday.

The old boys Ross and Zayante (more on them later : ) are moved across town to a different pasture. Sherri's 2 boarding Paso Finos stay in the pasture's little pen. The three that were to be ridden, Odyssey, Zane, and Redman, were tied to Jackie's trailers, all weekend. Unless they were ridden or handwalked around, they stayed tied to those trailers.

Once the ride was over on Sunday, and all the horse trailers pulled out, and everything was picked up, all the horses were reunited once again.

Odyssey, Zane and Redman were turned loose. The Paso Finos were let out of the little pen. Ross and Zayante, hauled back here to their home pasture, were turned out. The horses didn't know what to do first - 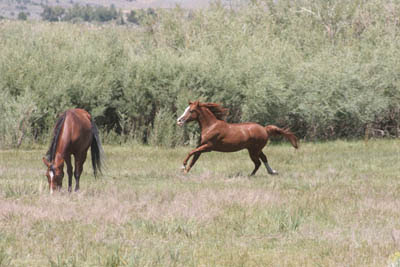 skid to a stop to sample all the hay piles left behind, run around some more, roll, shake, stop and watch the shenanigans, run and eat at the same time... Redman made the most of the running.

So many things to choose from - freedom once again!

Posted by The Equestrian Vagabond at 11:58 AM

Don't you just love it. It was one of the happiest times of the year at my ranch. Turning the herd down and out to the lower 10 acre pasture. These pictures remind me so much of that time. I will miss it greatly! However, I can come back to these pictures and see that any time now. Thank you, Merri! I showed Baby Raven. He was like "wow, that is crazy stuff!" LOL

happy dancing all the way around.

gp
ps how are you recovering from tevis?

I just love your stories.This year has been a year of rebuilding for us. While recovering from colon problems I look forward to all your pics and stories. thanks cole