Get Tuff Or Die 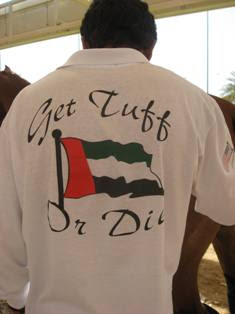 Nestled in the middle of a long row of endurance stables in the desert 45 minutes from Dubai, is a barn of horses belonging to Shaikha Madiya Hasher Mana al Maktoum, the UAE's first female Arab endurance trainer, and the first UAE woman ever to compete in endurance races here.

Endurance racing on horses is not something most Arab women are expected to do, and competing in such a men-dominated sport is itself a huge obstacle. It's a tough world to break into in the UAE. What does an Arab woman do, and where does she go to learn about endurance racing? 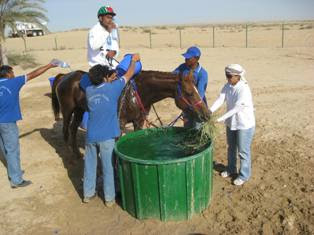 She first started riding in her uncle's stable when she was 16. Her uncle is Shaikh Mohammed bin Rashid al Maktoum, the Prime Minister and Vice President of the UAE, and emir of Dubai, an owner of top flat racing Thoroughbreds around the world and a competitor in endurance racing around the world. "I was only walking and trotting, but then I used to sneak horses out and go gallop in the desert." She didn't know what she was doing, though - she was just copying what she saw others do - and it wasn't until she met Grace Ramsey of Illinois, who was over here training endurance horses, that started her on the path to where she is now.

One of Madiya's horses colicked when she didn't have a trailer to use, and in desperation, she asked for help from Grace, who hauled her horse to a vet clinic. "And then she couldn't get rid of me," laughs Madiya. 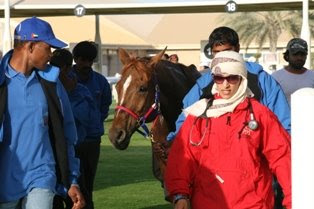 She stuck around Grace enough, showing that she was determined to learn everything she could, that eventually Grace invited her to come to the US to learn about endurance riding. In the US at Grace's farm, Madiya learned a different aspect of endurance: endurance riding. She learned to do everything herself, (here, the grooms do everything for you), tacking her own horse, learning to rate and not push a horse too fast too soon, "getting tough" - learning to do a ride by herself and not rely on a crew every step of the way, like it's done here in the UAE. A 20 mile loop without assistance? Preposterous (and simply not done) in the UAE! But normal in America.
She learned about saddle fit, electrolytes, leg care, and what to look for in an endurance horse. She learned the value of not overdoing it in one season with a horse - she'd rather have a horse that can go for years, instead of having a horse than might win one race. Under Grace's tutelage and encouragement, Madiya got serious about weight loss, fitness, and eating right - one could say she's now also obsessed about working out. She has a personal trainer Tim, who has now also caught the riding bug - he's started taking riding lessons at Madiya's stables on one of her old endurance ponies.

In the US in 2004, after completing a couple of LDs and a couple of 50's, Madiya rode in her first 100-mile ride, in Oreana, Idaho, in the Arabian Nights ride. It was a tough ride: "My God it was so hot!" she recalls. "But I wasn't going to quit - Grace would have kicked my butt!" Not to mention Madiya is not a quitter. When she puts her mind to something, she WILL accomplish it. You might get that idea from her "Get Tuff or Die" stable motto. 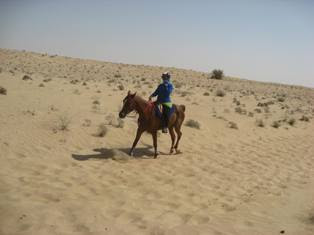 She returned to the US in 2005, 2006, and 2008, and has completed over 1280 AERC endurance miles. The knowledge that she has gained over all those miles and has brought back home with her has been incalculable. "Now I can go and ride anywhere in the world and compete, because I know I can do it myself." The friendships she has made in the US and around the world are also immeasurable: she calls Grace "Mom", and she keeps in close contact with many of her friends in the US, calling or texting them before and after her rides here, always talking horses, what they have done and what's on their schedule. 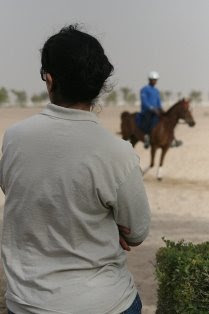 Madiya has about 35 horses in her stables, including veteran endurance horses, youngsters, and some ponies. The compassion for her horses is evident in the way she talks to her horses (“Hey Buddy,” “That’s my baby!”), in how she closely observes them, in how she runs her hands down a leg to check for abnormalities. During one endurance race in Dubai, we followed Molly’s Valiant Heart around an entire loop. Now owned by Al Aasfa stables, Madiya had ridden “Sponge Bob” in two 100-mile races in the US. She drove beside him the whole loop, watching and calling out the window to him. 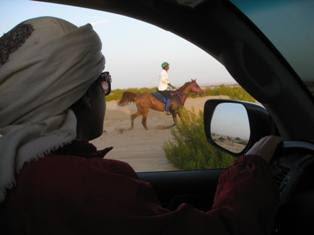 She has ridden in the President's Cup, one of the premiere endurance races, and the National Day cup, among other high profile UAE races. Her assistant trainer Ali Khan, from near Jaipur, India, has worked for Madiya coming 5 years, and he supervises some 24 employees, including his younger brother, the stable foreman, and various riders, grooms, a shoer, a driver. 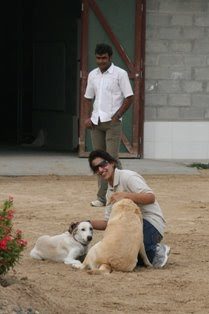 Madiya's already planning her summer visit to the US again, when the racing season here in the UAE is shut down. Keep your eyes open there: if you see one determined, endurance-obsessed young lady with that Horse Sparkle in her eye coming down the trail at you, it just might be Shaikha Madiya. Say hi and fall in beside her for a while. Besides having a fun ride, you just might learn something from her, and you'll certainly catch a bit of her Endurance Horse Obsession Disease. And who couldn't use a little more of that?
Posted by The Equestrian Vagabond at 8:56 PM