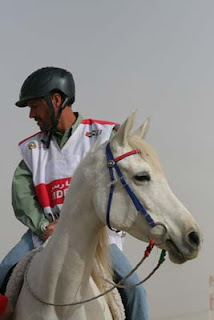 All is Golden in Abu Dhabi... the earth and the sky. Sand on the ground, in the air, between your toes, in your eyeballs. My plane landed in the wee hours of Thursday morning in what looked like a fog, but what turned out to be a sandstorm, which blew steadily all day.

Three different people said the weather is supposed to clear tomorrow, but those were foreigners. The locals say this will stick around for a while, which could help to make Saturday's 10th running of the 160-km President's Cup interesting. Another important item that could make things interesting is the new set of FEI qualification rules that may possibly keep a good number of UAE horses in the stables.

Lots of familiar faces popped up in the morning at the Hotel Mafraq, at breakfast, at the Press Conference in Dubai, at the hotel lunch buffet, at the evening dinner party.

It's great to see Penny and Peter Toft here. Having come off a wonderful ride on her beloved horse Don in Malaysia, Penny's having her first ride on the mare Kitt. Penny's ridden in the President's Cup 4 times, finishing twice, her best finish in 2004 where she was 7th on Al Reef Stable's Phantasm DJ, a horse they had previously owned in Australia. Penny noticed the track has become harder - they've removed some sand, or it looks like they water and plow, water and plow parts of the track, until it looks like pavement and is quite compacted. Peter suggested the Raven might have to take a training ride with Penny tomorrow : )

Jan Worthington is feeling under the weather, but her horse Golden Lightning is feeling terrific, even better than he did before the World Championships in Malaysia in November. And that is wonderful to hear, since, many of you will remember, he and Jan were knocked over by a bolt of lightning on the second loop there, went on to finish the ride, and then vetted out at the finish, a crushing blow after all they went through. 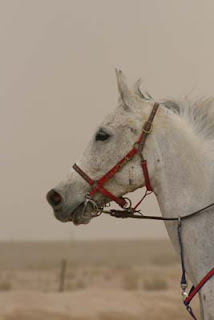 "Leon" just got a shave job yesterday, and he looks terrific. I rode in the car with Grace Ramsey, as we followed her daughter Wendy and Leon on a little leg-stretching outing in the dust storm this afternoon. "He's the best horse we've ever had," Grace said. "Nothing bothers him."

He really looks good, as does John Crandell's mare 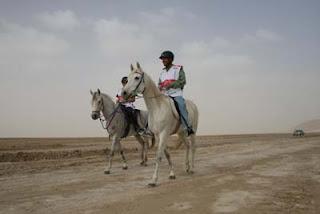 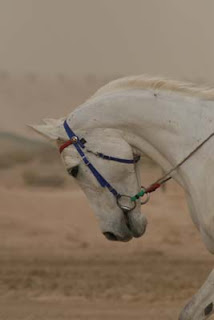 John took her out for a walk with Wendy and Leon - he wasn't sure he wanted to ride her in this dust, and he wanted to walk with her and see what she'd be breathing. Of course, he wrapped a handkerchief around his face so he wouldn't get the FULL effect. Melika is a homebred, his mom's favorite. This will be her first 160 km ride, and not because she's not capable. John's mom just prefers riding shorter distances. 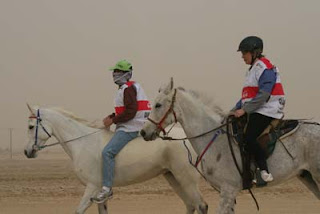 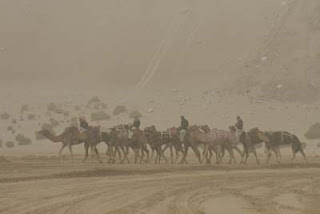 they thought they could beat. They slowed back to a walk, and had a good 45 minute outing. 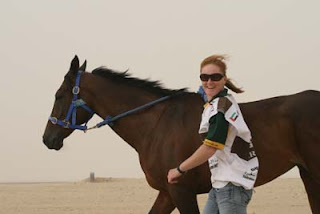 and her twin sister Naomi were out handwalking the two Castlebar horses, Castlebar Kalahari, 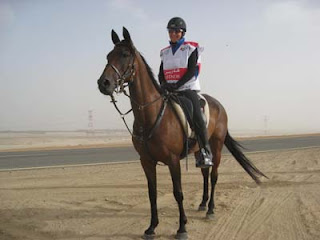 who Meg Wade will ride, and Castlebar Darthvader, Kristie's ride, a stallion by one of Australia's best sires, Chip Chase Sadaqa. Both those horses were looking quite fit also.

2008 Polish Champion Kamila Kart of Poland is here to ride in her first President's Cup with her Polish champion and Best Conditioned horse, Cert. They have been here since February 1, and he is training well. Another Polish rider, Beata Dzikowska is here with Cyryl, who finished 14th in the dismal weather at the 2008 Italian Championships in Assisi.

French chef d'equipe Jean Louis Leclerc is here with 3 French riders, Phillippe Benoit, Caroline Denayer, and Pascale Dietsch. "It is a small world!" Jean Louis said when he saw me. Both Phillippe and Pascale are riding the same horses on which they completed the World Championships in Malaysia in November.

Dinner party was an extravagant food affair at the Emirates International Endurance Village. It was impossible to even sample everything. For entertainment there were camels to ride and falcons to hold (yes, I did : ) .

Tomorrow are the vet inspections, the national horses will be moving onto the grounds, and hopefully I'll get some photos of some more of the riders on course. And hopefully some of the dust will abate.

I did get a rental car to drive, but so far have avoided using it to get to the venue. It's a bit of a meandering path to get there (and you go a different way, coming and going), and since you can't really see any landmarks what with the dust storm, I've gotten a ride there twice today. I didn't have a chance to pick up a SIM card to call anybody if I do get lost, I don't have any maps, and not one dinar in my pocket to pay someone for directions if I need them.

I think tomorrow if I follow somebody, I'll remember the way next time on my own. Insha'allah. : ) 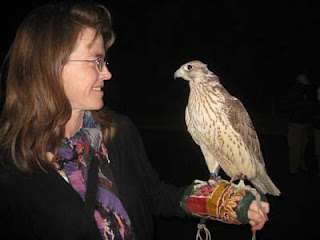 Posted by The Equestrian Vagabond at 10:28 AM