Who Took My Mountains 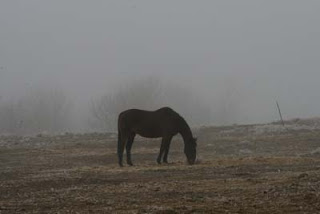 It's been so long since I've seen the Owyhees - only 6 miles up the canyon - that I'm not sure they are still there.

Something like two weeks ago, they were big and in your face and covered with snow, but visibility has been, for two solid weeks, a mile at the most, and 50 yards at the least. The hoarfrost is mostly gone in the canyon here, but the temperature has varied little from 25* since the last glimpse of the sun.

Stormy took me on a cold ride this morning after a slight smattering of snowflakes on the porch steps. As we headed down the road, 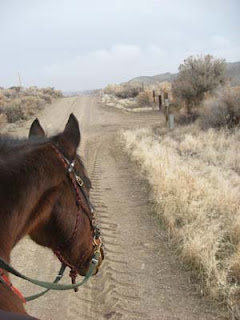 briefly the sun tried to make a timid appearance, just to remind us that it IS still up there somewhere. We fleetingly cast an impostor of a shadow... 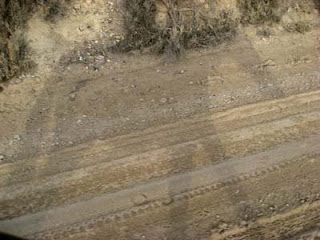 until the sun gave up and evaporated behind clouds again. 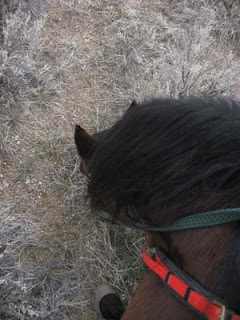 That's okay with me, he enjoys it. (Anything for my horse : )

Today the clouds are higher, visibility is a bit further, but still no Owyhee Mountains. 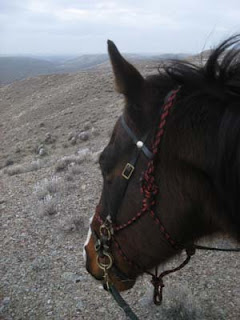 Just a bit of hoarfrost is still lingering on the sagebrush on the northwest flats; and on one, single 15 foot span of barbed wire between fence posts up there, hoarfrost still clings fiercely to one side of the barbed wire. 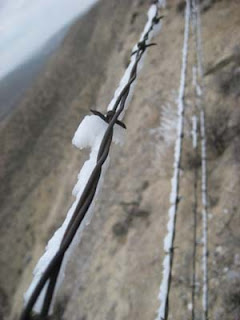 It's only on this one short section of fencing, and nowhere else. The mysterious magic of ice. 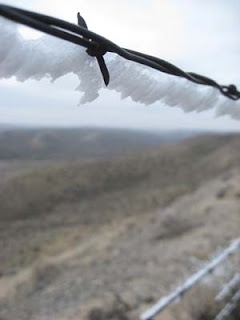 It was chilly, a slight breeze freezing toes and fingers nearing the end of the ride - feet stuffed far into the fleece stirrup covers Carol made for me, gloved hands stuffed down in pockets, and head hunched down into zipped layers.

My eyes were watering. Stormy and I both had a runny nose. It hurts the frozen feet to get off the tall horse to open a gate, and it hurts to mount back up (well, that has less to do with the cold and more to do with wear and tear : )

In a rather perverse way, I love the gray skies and fog, and yes, the snow and the cold - though it would be nice to get a glimpse of the mountains again one of these days, just to make sure they are there. And it IS nice to get back into the house and thaw the frozen body parts. 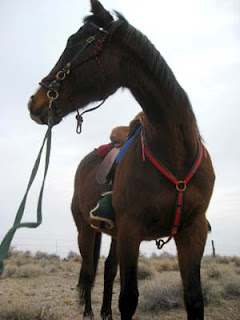 Posted by The Equestrian Vagabond at 3:03 PM

I was wondering if you Owhyee-ites were getting fog too. If the day is just right I can see the Owyhees from one of the buttes here in Gooding: one hundred miles away! I like the fog, but it's icy here in Gooding county so no riding. I haven't ridden in SIX WEEKS! Yesterday when I called to the horses to feed them they came in running out of the fog. They looked like ghosts appearing, way cool. Glad you get to ride...perhaps my fat old yak (AKA "Agnes")and I will get out and about in a couple weeks. I'll keep my fingers crossed. In the mean time, you can ride vicariously for me!