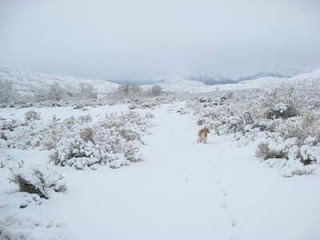 A fresh thick snowfall, perfect for looking for cougar tracks up Pickett Creek.

I put on my hiking boots and gaiters, and Quincy put on her stylish Snow Ball Boots, 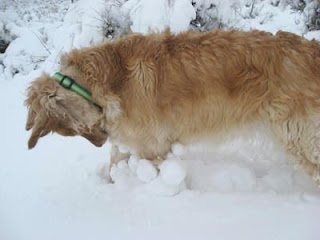 (she actually picked them soon after we got started, and, much to her annoyance, she couldn't get rid of them 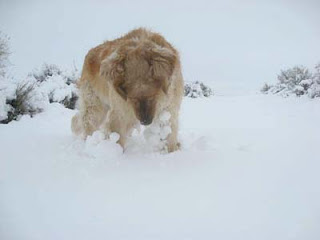 ) and the dogs and I hiked up the canyon.

The road was pristine - there was not one single paw print or hoof print along the entire 1 3/4 mile road to the Narrows in the 5 inches of snow.

We did see 2 herds of deer, one on either side of the canyon that, when we got to within a half mile of them, took off up and over the bluffs on either side. We also saw an eagle 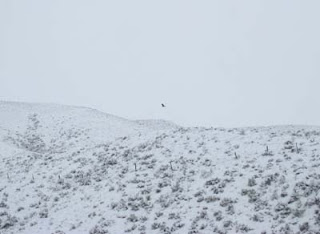 and a northern harrier, and we heard a coyote howl fairly close by.

When we got to the Narrows, 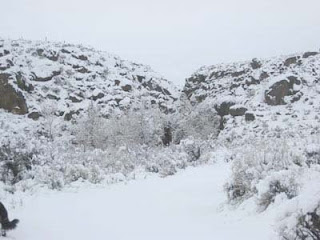 the sun was a faint glowing ball 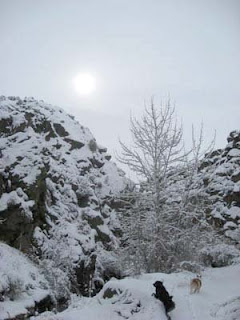 in the southwestern sky. We hiked on into the narrow red-walled canyon, 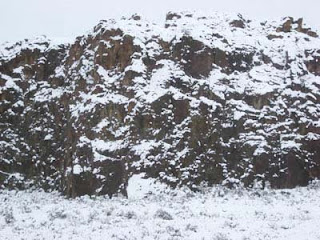 startling the pigeons hanging out on the cliffs, plowing through the undisturbed snow, crawling under heavy snow-laden branches draping the creek, 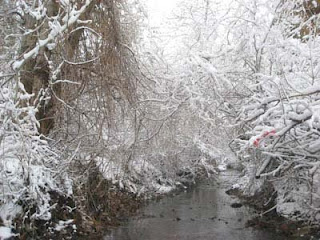 getting snow down our backs, and splashing through the creek itself. There's a surprising amount of water flowing in the creek up there now, 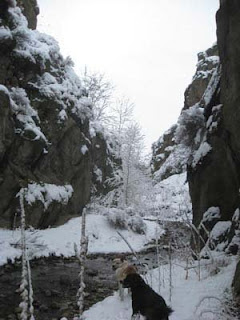 though it still disappears in places on its course down-canyon, flowing again near our house, disappearing and reappearing occasionally as it heads down to Oreana.

We finally came across a few deer tracks in the narrow canyon itself - but no cat prints, not even any coyote prints. I was hoping to see the long-eared owl that lives in the canyon, but he was gone too. Probably heard us coming a mile away, panting loudly as we waded through the snow and splashed in the creek.

I am pretty sure, what with the deer hanging out, and the absence of any paw prints and the lack of raised dog hackles, 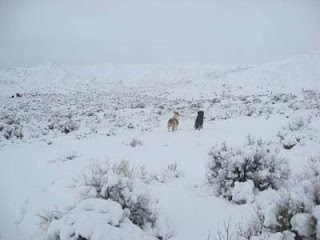 and the lack of horse alertness, that there were no cougars in the vicinity. In fact, despite the rumors of 2 cougar kills I've heard of in the last two years in this canyon, I will remain skeptical until I see concrete evidence with my own eyes. I'm always looking : )

I didn't really expect to see any cats or any evidence - it was really just a great excuse to hike for 5 miles in the snow. 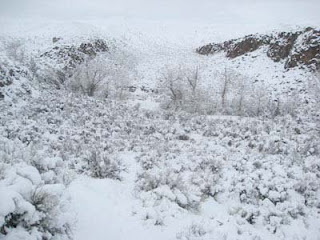 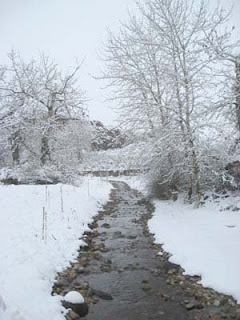 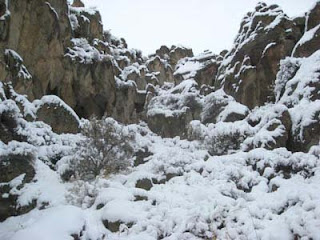 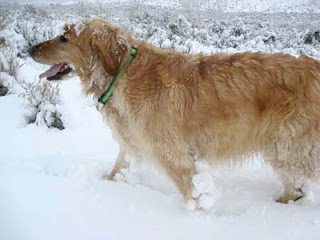 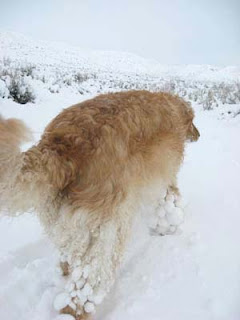 Posted by The Equestrian Vagabond at 4:50 PM

Merri, once again thank you for such great pictures!
It looks so peaceful, also the very style shoes your dog put on are hilarious, I can't stop smiling looking at them...

Quincy has since decided to forego Fashionable Snowboots. They didn't work out too well.