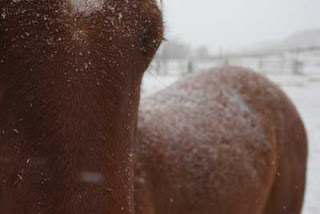 Winter is really, really, here - we finally got a layer of snow on the ground!

I've been so thrilled - I've been checking the on-line weather forecast every 5 minutes like other people follow, say, politics before the election, or an auction on ebay that they're bidding on. When today's snow chances went up from 40%, to 60%, to 80%, I was really excited. As I was when the forecasted temperature for Tuesday night went from 10* F, to 6*F, to 4* F - that's FOUR DEGREES. As I was when the snow really started falling, and began accumulating on the ground. Yeahoo! I kept giving Steph the exciting winter updates as they happened. Steph, a warm weather person, does not find them as exciting.

But - and I don't say this lightly... couldn't the real winter have waited just ONE MORE DAY?

With me already having to bust the thickening ice in the stock tanks several times a day, and with the temperature going to get so low on Tuesday, I rather desperately need some stock tank heaters. I couldn't get into town the last few days because of extenuating circumstances, and I didn't want to chance going in today on snowy, icy roads.

However, I really have no excuse since I did know that winter was on its way since, oh, April, and I've sort of put it off till the last minute... and now it's a bit too late.

Well, it gave me an excuse to spend much of the day outside in the snowflakes and accumulating ground cover, trying to figure out the stock tank thing.

Which was squeezed in between taking pictures of the ever ebullient Jose, playing with Mac in the snow. 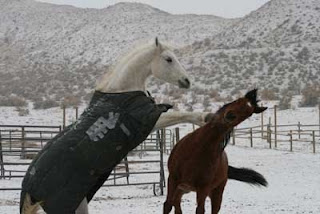 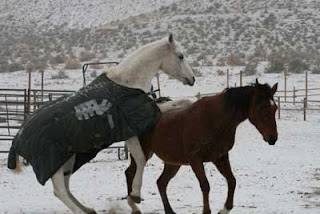 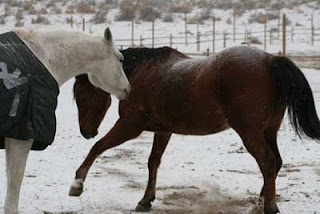 I borrowed a stock tank heater from Carol, figured out which of the three tanks and pens needed it most, knocked a lower fence rail down so that 2 pens can share one heated tank, drug a long hose (which I'd first drug inside the house to thaw, and made a mess) outside to a non-frozen spigot, filled all the tanks - since this will be difficult when it's 4* - set up the floating heater in one of them, and tried to rig it so Dudley won't get to the cord and chew it and either break the heater, shock himself, or short out the power.

For the other stock tanks, hopefully I'll get into town tomorrow, and at the least, I've pulled out a pulaski to bust the ice. If it really does get down to 4* (and here it will probably be less then 4*), I might have to get up every few hours to bust the ice...

Next year, I'm not going to wait so long to prepare for winter. 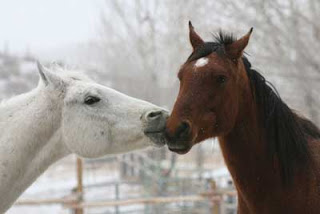 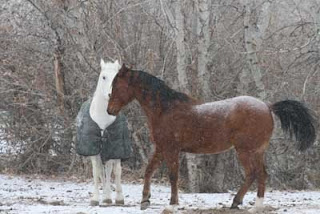 Posted by The Equestrian Vagabond at 5:36 PM

no sno crastination here since we had a big one already in october.. bummed here since it's been -14 the last three days so no riding :( Ride tomorrow tho..

stay warm you and the young 'uns
cid and gazi