I Luv My Horse 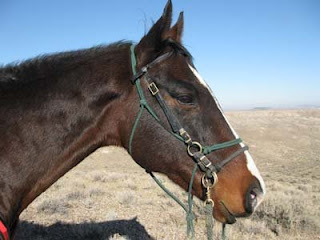 It's not often I can ride my horse Stormy, what with me being gone a lot, or having plenty of endurance horses to ride, or his being lame much of the time from navicular.

I took him out today, after not having been on him for a while, and he was so amenable to going out, we took a longer trail. He had a good uphill, sandy workout up Stormy Wash (hard work for a fat boy). Nearing the top we took a different route, one that led us all the way up onto Steph's trail on top of the ridge.

When the 360* panoramic scenery rose into our view Stormy stopped in his tracks. His head popped up and his eyes got bigger - I could just see the wheels in his brain churning as he saw Hart Creek and Brown's Creek drainages and further ridges to the southeast, the Owyhee mountains to the southwest, Bates Creek and the flats to the northwest, and the distant Snake River canyon, and the Boise mountains to the northeast. 'Wow! What a view! I've never been up this high before!' 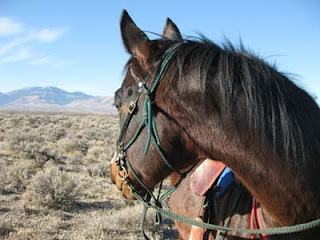 Used to be, I'd take my Thoroughbred ex-racehorse out for a ride, and when I got a little too far from home, he'd lose his marbles and panic, and I never knew if he was going to fall over or flip over, and he'd wash out and be a nervous wreck. He couldn't stand still, and he'd lunge or want to bolt blindly, until I dismounted and led him home. Since then I'd learned to take it slowly with him - go out a little further each time, and always a little bit different direction, so it's never a big deal for him.

Today we went a little further then we'd ever been, and he was actually enjoying himself - he even trotted some of the uphills (!) (probably pretending to be an endurance horse, after hearing them talk about their exploits).

He stood there at the top of the ridge for a good half a minute soaking up the view, before continuing to meander contentedly down the trail.

I Love my horse. 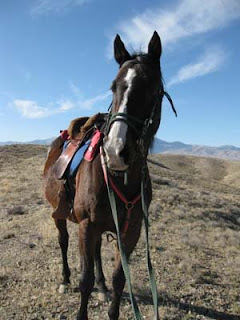 Posted by The Equestrian Vagabond at 1:15 PM

When I saw the first picture of Stormy I thought, "wow, this horse looks like Majestic Prince!" Got to the bottom of your article - of course - that's why!

Take Care. What does Raven II think of Stormy?