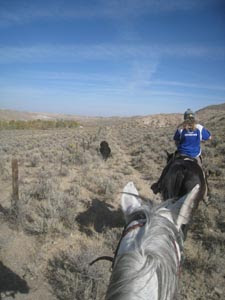 The other morning, I came back from a ride on a horse, and the rest of the horses were all in a tizzy, ears pointed up-canyon, noses in the air snorting, tails over backs, and butts backed up as close to the home fences as possible for protection.

It happened not to be the same 3 cows that we cowpokes, John, Connie, and I, failed dismally at trying several times to move out and toward Oreana the other week (see Cowpokes R Us) - but it was three more cows - two mamas and a baby again, and they wanted to get home to Oreana, but were stuck behind our fences.

So later in the day, we two girl cowpokes saddled up our horses - me on Cowhorse Mac, and Connie on Pretty Boy Finneas, hitched up our chaps and buckled on our spurs, and made a plan.

First, we locked our other cow-fearing horses in the hay pen so they wouldn't panic or interfere or try to escape out the gate we'd drive the cows out. Then we opened the gate we were aiming for, and went back and circled 'round the 3 cows, and gently drove them toward the open gate. Mac of course knew just what he was doing, and where to position himself; Connie thinks Finneas must have done some herding in a former life, or earlier in this one, because he seemed to know something about driving cows. However, I noticed he was right on the last cow's tail, like he wanted to rub his face on her - I think he thought the big black cow was his mama.

We really didn't have to do too much - the mamas knew the way home (every year, the cows make their way down from the mountains into Oreana - these just happened to come down the narrows of Pickett Creek Canyon, and they ended up on our land and were fenced in) and they just needed to have the way opened up.

We followed them as they made their way up and over the Tevis ridge, down into and across the Training Wash, up and over Steph's ridge and down into Blond Cow Wash. They followed Blond Cow Wash all the way down to where it intersects Spring Ranch Road. There the cows could have either turned down the road (and had a long roundabout way to get to Oreana, if all the gates were all open), or crossed the road and continue on toward Oreana. Without any more prodding from us, they crossed the road and headed straight to Oreana.

We called and left a message for Rohl that we successfully herded 3 of his cows toward Oreana, and they should be there shortly. Of course we didn't mention our failed attempt on horseback last week with the other 3 cows, and hopefully Rohl hadn't read that story. (John ended up rounding them up with a 4-wheeler and driving them up onto Steph's ridge where they found their way home.) So, now we look like real professional cowgirlpokes. Rohl even called back to thank us.

Heck, he may want to hire us after all, since we're pretty brilliant at moving cows.