It was a bummer when the Antelope Island endurance ride (on Antelope Island State Park in the Great Salt Lake, Utah) was cancelled in April due to COVID-19, but it was the State Park people who contacted ride manager Jeff Stuart in the fall and asked him if he wanted to put on the ride then. Jeff was able to scramble together a date and plan, and for the first time in memory (not counting the AERC National Championships in 2016) Antelope Island happened this last weekend in September. We all remembered “Aunt” Shirley Fox, who’s been an integral part of this ride since the beginning over 30 years ago. She passed away suddenly last fall, and she left a big hole behind her.

Driving in on Friday the whole area was blanketed in the wildfire smoke that’s been plaguing the West the last couple of months and hampering training and riding and living conditions for so many people. But by Friday evening the smoke had cleared from the island and surrounding mountain ranges, revealing the familiar scenic mountain and lake views that make this ride so spectacular.

But wait - what happened to the Great Salt Lake?! Due to thirsty humans, the water level has receded so far you can only see the blue water in the distance, even if you are standing on the (ex-)shoreline of Ridecamp on White Rock Bay. The thirsty humans aren’t drinking the salty water itself, but sucking almost dry the in-flowing rivers before they get there. The water is almost 11 feet lower than in it was 10 years ago and shrinking more than a foot a year. It’s noticeably lower than it was at the ride just a year and a half ago.

Because it wasn’t buffalo calving season, day 1 trails took riders on the southwest side of the island, where the ride rarely gets to go.

Days 1 and 2 had a rider limit due to state COVID restrictions on gatherings. Day 1 was right at the limit, but only about half the riders hit the trail on day 2, which always seems to happen on the multi-days, even in this weird ride season.

Here are some highlights of this year’s ride: Sunsets were just amazing! You can pretty much count on one every night. Young Rider Alex Shampoe from Colorado Springs, who has an envious habit of pick-up riding, pick-up rode the 50s, finishing 7th on Day 1 aboard BH Chief, and 4th aboard DWA Malik on Day 2. Christoph Schork was a familiar face in the 50-mile ’winner’s circle’, finishing first on both days, aboard aboard GE Atticus Golden Sun and GE Haatra (and Best Condition). One of his awards was a dozen fresh chicken eggs from Tonya's chickens! Diane and John Stevens made the journey from Northern California. They both rode and finished both days of 50s. Titan, ridden by John, got his 3000 miles. Nina Bomar and Juan traveled all the way from southern California to finally do an endurance ride this year. Nimo did his first 50-mile ride on Day 1, and Saudii did Day 2. Of course Juan made his famous tacos, and a couple other meals, one of which I was lucky enough to time just right! 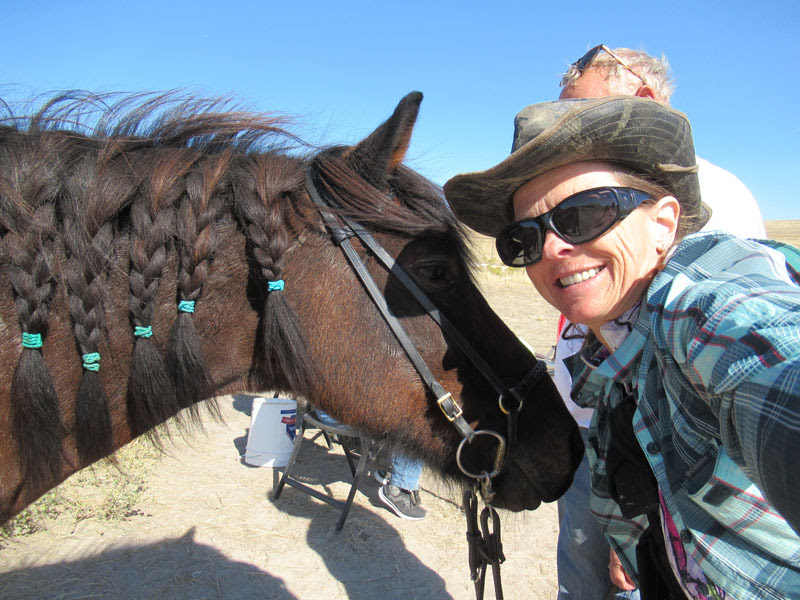 THERE WAS AN ICELANDIC HORSE AT THE RIDE!!!!

“He’s fresh off the boat,” William Marshall said of Kvistor. It brought back memories of my 8-day ride in Iceland last fall aboard Icelandic horses for 300+ kilometers, one of THE. BEST. adventures of my life.

Kvistor was tired after his first 25-mile ride, and I’m sure William was like, OK, enough already, because I couldn’t keep my hands off his horse, but I had to photobomb him!

Kudos to Jeff and Tonya Call Me Annie Stroud Oakes and Gary Oakes and Terri Williams, and the crew/recruited Dave Goodwin, the vets, and all those enthusiastic vet students, and all the other volunteers, for pulling off another great edition of Antelope Island.

Posted by The Equestrian Vagabond at 7:35 AM