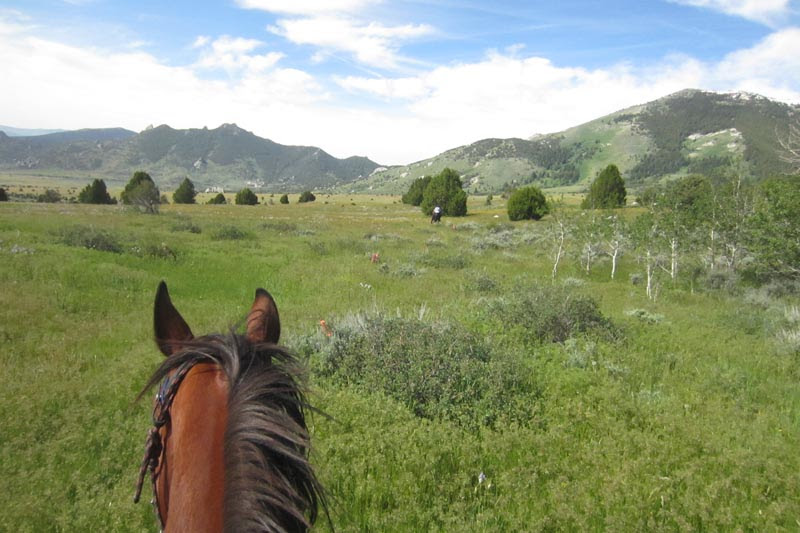 We do things 'a bit differently' out here in the Western endurance riding half of the US, according to a couple of visiting from the Southeast region. Mike and Ruth Anne Everett journeyed out from North Carolina to the Northwest to partake of the City of Rocks multi-day experience. Mike crewed for Ruth Anne, who rode Katya Levermann's gelding Kharmichel LK (whom mom Katrin hauled from British Columbia for the weekend) all 3 days.

At the City of Rocks Pioneer 3-day ride in Almo, Idaho, no, we're really not set on racing here. It's really more about enjoying your horse and ogling the scenery and admiring the fauna - of which there was a plentitude after this long wet winter - on the trails in City of Rocks National Reserve and Castle Rocks State Park. Most horses stroll out onto trails at the start, and stop to dine on the good grass along the way. Many riders are more interested in finishing all 3 days on the same horse (this year there were nine 3-day horses on the LDs; nine 3-day horses on the 50s) than winning. Ruth Anne caught the relaxed City of Rocks multi-day fever, gawking at the views on trail, soaking up the rock formations and flowers, taking plenty of pictures, and, with Suzanne Solis from Georgia, learning how to cheat a barbed wire fence gate shut when all else failed. :) For a little entertainment and excitement, there were those mules that always put on a show - the Heart 2 Heart ranch brought a slew of mules for a pack of junior riders in neon orange shirts on Saturday, and then dad Warren (the "fat man" - his words, not mine!) and 2 daughters Trinity and Jill raced their best mules on the LD on Sunday! The 6th annual City of Rocks Pioneer endurance ride may have been the best. (And the last? It's to be determined…) A better than expected turnout made for a several days-long endurance party. Weather is always a surprise and always different each year at City of Rocks... and our conclusive mantra this year was, "and there were no thunderstorms!"

After the perfect riding weather all 3 days (cooler, often cloudy, and no thunderstorms!), who cared if it rained on some riders on their last loop Day 2. Who barely even remembers those terrific wind storms that on one night ripped up the gazebo tent, and left grit in the eyes and dust in the lungs for a week afterward. Skies were spectacular for every hour, from every angle, and the full moon lit up the parkscapes. One evening several brilliant rainbows popped out in succession, some lasting no more than 45 seconds.

From basecamp at a local rancher's RV park near the entrance to City of Rocks, Day 1's trails looped to and through Castle Rocks State Park. One loop through the park took riders down a spectacular green and flowery meadow overlooking the valley. Along the way to Castle Rocks, and on the way back home, riders came upon a refreshing Lemonaid stand where a couple of local little kids sold $1 cups of lemonade, and wrote up a tab for you if you weren't carrying money. (They came by camp in the evening to settle up!) All 27 starters finished the 25-miler, with Joan Zachary and Chico finishing first in a ride time of 3:01. Fifth place Debbie Gross and Jack won Best Condition.

Day 2's trail was supposed to loop south through the ranching community of Yost, but because of high water (or, rather, deep gooey, sticky river banks) in the Raft River, for safety's sake the trails were changed to repeat Day 3's loops through Emigrant Canyon and Indian Grove in City of Rocks National Reserve. 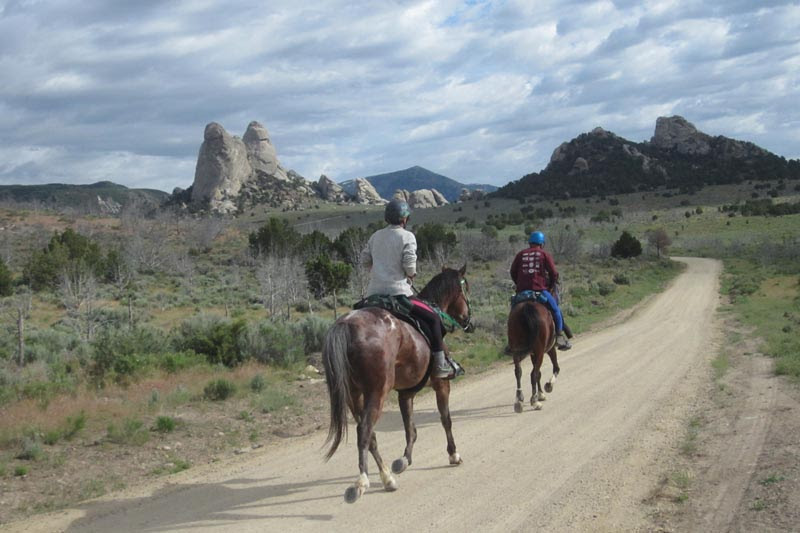 23 of 26 riders finished the Day 2 55-miler, with Christoph winning aboard his other AERC War Mare and AERC National 100-mile Champion, GE Pistol Annie in 6:03, with Carla finishing second aboard Moon again. Annie got the Best Condition award.

Day 3's 50-miler had 17 finishers in 18 starters, with, again, Christoph winning on GE Pistol Annie, and Carla finishing second on GE Stars Aflame (and Best Condition) in 5:31. Ride manager Steph Teeter escaped onto the trail and smoked after them on Owyhee Smoke Signal, finishing third in 6:10. And the race was on with the father-2-daughter mule team in the 25-miler. And race they did, smoking the course, coming in together at the finish, with daughter Trinity's mule pulsing down first on Gracie in 2:33, with daughter Jill second on Out of Idaho a second later, and dad's mule Bear pulsing down in 2:34. It's reported dad got on a first-time endurance mule who took 3 people to hold him still and 2 more people to get the bit between his teeth. Dad didn't do too bad at all, because Bear got the Best Condition award. "It's not over till the fat man rides," he quipped, as he got up to get his award.

Head veterinarian Robert Washington chose, as his 'Getaway horse' (best overall 3-day horse he'd choose to get away on if he was being chased by Indians back in the day), David Brown's Chipikiri in the Limited Distance, and the Levermann's Kharmichel LK in the 50s, ridden by Ruth Anne Everett.

Several notable milestones were reached at this year's ride.

Yes, Christoph Schork added another 3 wins to his already-over-300-AERC-most-wins record. 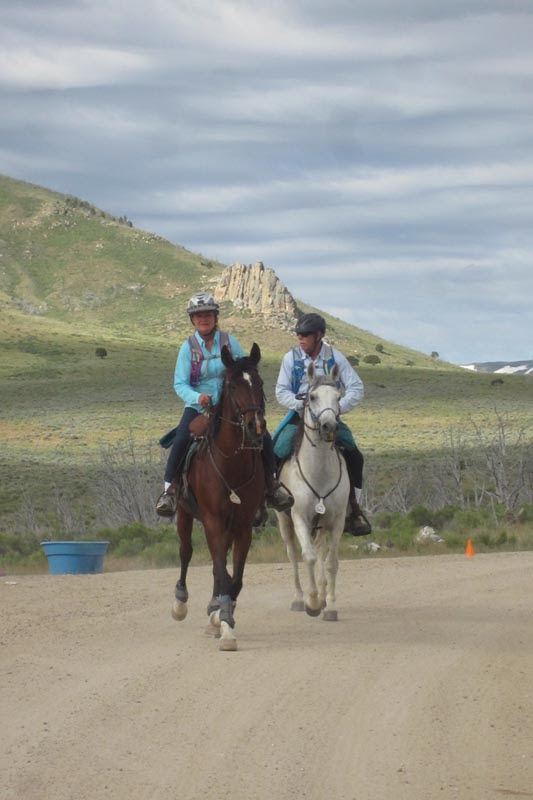 Naomi Preston (11,000+ miles, with Mustang Lady in the Hall of Fame), rode her first ever bay horse in endurance (!), finishing all 3 days on Fire Mt Malabar, riding with Lee Pearce on JAC Winterhawk.

Connie Holloway and her Grandson of the Black Stallion (and don't you forget it!), Phinneas achieved Decade team status - an awesome AERC award that epitomizes the longevity of our horses in our endurance sport.

Also of note were the 18 horses that completed all 3 days of the ride, and all the Juniors who rode: (by my calculations) 5 on Day 1, 12 on Day 2, and 8 on Day 3. How can we continue to support these Juniors, who are the future of our endurance sport, after all us Old Fogeys can't clamber aboard our old steeds anymore?

And the Limited Distance riders outnumbered the 'endurance riders' all three days. It's a division of our sport that's sometimes denigrated by some Old Fogeys who may soon not be able to clamber aboard our steeds anymore, but the division that is becoming the butter on the bread that keeps endurance rides going. Maybe it's time to change a blinkered, parochial way of thinking.

It takes a huge effort, and more than an enormous village to put this ride on 4 hours from home. The entire Nicholes family vacationed here for the week, though all were persuaded into helping with the rides at some point, with Terrence and Matt being indispensable. The Durfee Hot Springs and the Garbage Pizza at Rock City are amenities to soothe weary souls and riders.

City of Rocks and Castle Rocks is a nice system of current trails over historic emigrant trails, and is pretty extraordinarily well-managed by the State Park system. Both parks welcome horse events along with hiking, climbing, biking (all bikers I've ever met on the trail there have been polite and safe toward horses), ranching, hunting.

And will the 'fat man' ride again at City of Rocks? This year's near-perfect weather and scenery might, or might not, have been the book-end to this multi-day ride. Photos and more of the ride at:
http://www.endurance.net/international/USA/2017CityOfRocks/

Posted by The Equestrian Vagabond at 6:37 AM