The Tevis Cup has been a mythical institution since Wendell Robie and a handful of friends first proved a horse could do this 100-mile ride in one day from near Truckee, California, to Auburn, California in 1955. 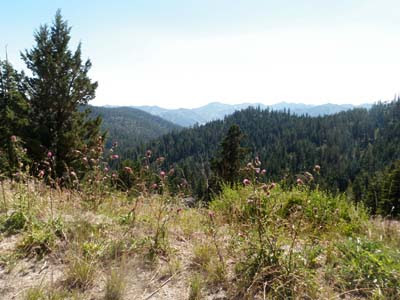 Even if you're not a first timer, the legendary lure of Tevis probably has drawn you back into its web. When you look across the Sierra Nevadas on the drive down that forest road into Robie Park, and know you'll be riding 100 miles over those mountains into Auburn, it can't help but stir your emotions, no matter how many times you've ridden the trail. And the smitten came again, this year only 161 of them signed up to ride. (Around 200 are usually entered.) "Tevis Gremlins," said Dave Rabe, referring to the low number of entries. Dave came to crew for friends Kerry Redente and Bill Taylor, going for their first Tevis finishes. Dave just recently returned to the endurance trails after a bad accident in December where he fell off his horse and hit his helmet-less head. He wasn't ready to tackle Tevis again though: "I've been having trouble with the heat."

The heat: Mother Nature always plays her part with the Tevis trail and participants, but this year was going to be a particularly hot one. Temperature predicted for Auburn on Saturday was 102° F, which meant those canyons that the horses and riders would be traversing would be even hotter. "The heat is going to make it a ride, not a race," said Kathy Perry, who would be riding her friend Becky Spencer's horse Home Run Derby, a 10-year-old Arabian gelding, in quest of Perry's 22nd Tevis buckle.

Some people prepared for the expected heat, training themselves and their horses during the hottest parts of the days, and putting blankets on their horses while training. Two returning Tevis riders in particular did not have heat training on their side. Kevin Myers and Rusty Toth of Durango, Colorado, only have the mountains and altitude to train in. That is probably a good alternative, as Myers (riding Auli Farwa) and Toth (riding Farraba) finished 3rd and 4th respectively last year, with Toth and Farraba winning the Haggin Cup (Best Condition judging the day after). "That wasn't the plan," Myers said. "I was going to ride Stoner (Farraba), but he got a girth gall. All the hard training, massages, and supplements went into Stoner, but we pulled Far (Auli Farwa) out of the 'back 40' for this ride." Myers was somewhat exaggerating, as Far's last 2 rides in April and May were two 2nd place finishes and 2 Best Condition awards in two 55-mile rides. Hal Hall would be going for his 3000-mile Tevis buckle, his 38th attempt at Tevis, riding Fred Emigh's 16-year-old half-Arabian half-Standardbred gelding PR Comet, a horse with a 27 for 27 record, and a 10th place finish in the 2009 Tevis Cup under Mark Engemann. Barbara White, 65, calls this an annual pilgrimage, and a "spiritual experience." This would be her 43rd Tevis ride, and she'd be going for a record 33 Tevis buckles. (Barbara herself is Mythical to some of us : ). She'd be riding Djubilee, a 12-year-old Arabian mare. With a 37 for 38 record, it would be Djubilee's first Tevis, and first 100-mile ride. Another pair of endurance legends would be hitting the Tevis trail together. Joyce Sousa - 22,000 AERC miles - and 20-year-old LV Integrity ("Ritzy") - 8000 endurance miles, and 33 100-mile completions - would be going for their 4th Tevis buckle together. The pair most recently won the 100-mile Owyhee Fandango in May, and completed two back-to-back 50-mile rides in June. Dayna Weary had unfinished business with her horse, 15-year-old The Reverling TGE (Crickett) on this year's Tevis trail. She'd gotten him at 7 and had him for 8 years, but had never ridden the Tevis on him. Some years she had other horses to ride, and 2 of those years were special circumstances. "In 2007 and 2009, Barbara White had needed a horse to ride, so I gave her Crickett to ride. She finished both years, which was fortunate, as those were her 28th and 29th Tevis finishes. That allowed her to get her 30th buckle the next year, which her dad (Bob Suhr) was able to see before he died. That was very special!" There had to be some good Tevis Karma in that. So this year Dayna and Crickett would team up together for the first time to tackle the Tevis trail together. Unfinished Business was the name of her team. Clara Berner, a 15-year-old Junior from Washington, was back for her 2nd attempt at Tevis on her adorable blue-eyed 12-year-old Arab/Welsh/Paint pony Benjamin. Last year she and her mom Mary Kraus were overtime; this year Clara would ride with her mom, and had Kathy Sherman lined up as a back-up sponsor, in case her mom got pulled. Clara was a not-quite-addicted endurance rider when I first met her at the Owyhee Canyonlands in September of 2009 when she did her first Limited Distance ride, but showing up for Tevis the second time proves that has changed. She and Benjamin have been working hard at the Tevis goal the last 2 years. Benny looked outstanding - buff and fit, one of the fabulous-looking Tevis horses that belonged on this trail. Clara was one of the 10 Junior riders whose entries were sponsored by EasyCare and Echo Valley Ranch.

What stood out to many people at the Vet In at Robie park was the outstanding condition of the horses. I heard it from many people I talked to. "I've never seen so many fabulous-looking horses than here at the Tevis," said Jeff Stuart, an endurance rider there to crew for Andy Bown, going for his 3rd Tevis completion on Tucker, a 14-year-old Arabian gelding. "Unlike some of the FEI competitions," he added. It is true that 99.9% of this year's Tevis horses looked like outstanding athletes, not too overweight and not too thin (unlike many FEI competitions around the world), and all exceedingly fit. Likely every one of the Tevis riders know exactly what they're getting into and exactly how challenging this course is: 100 miles of rock and dust; cumulative 19,000 feet of ascent and 22,000 feet of descent. "It's a hard ride and it's not for wimps or horses that aren't trained for it," said vet scribe Diana Hiiesalu-Bain, who has seen every aspect of the Tevis Cup, having scribed, crewed, and ridden and completed it. (See her blog entry on Scribing for this year's Tevis.) The stories go on and on: Utah's Bev Gray and her outstanding Jolly Sickle (37 for 37 rides, 5 of 5 100's and 13 Best Conditions, 11 wins, 1 Tevis buckle), who was ready to "bust out of his skin"; Utah's Sue Hedgecock and LZP Julioslastchance (38 of 42 completions, 4 100-mile completions, 5 Best Conditions) - "I'm just here," Sue said; Stephané Chazel from France returning to attempt his second Tevis completion, riding Potato Richardson's SMR Filouette, who finished in 7th place in last year's Tevis with Willemina DeBoer; Japan's Hiromi Kitaike riding Patrick's Fire, going for her 3rd Tevis buckle in a row; the Blakeley family of 4 from Oregon - father Wasch going for his first Tevis buckle, mother Gabriela going for her 3rd buckle, junior son Barrak going for his 2nd buckle (he was pulled last year, at The Quarry at 96 miles), and junior daughter Sanoma riding in her first Tevis… The stories would continue on ride day and afterwards, starting at 5:15 AM July 20th, in the 58th running of this mythical Tevis Cup.

**image of Hal Hall and Fred Emigh by Krista Turnage and the Tevis Cup folks!**
see pre-vetting photos of all the competitors at
http://www.teviscup.org/webcast/webcast.html# and click on the riders' names.


Posted by The Equestrian Vagabond at 7:19 AM

Thanks for writing your "take" on the Tevis! Well-rounded look at the ride & the horses/riders in it! Can't wait for more!

Love your write-up Merri!! You have a wonderful perspective on these riders and where they are coming from. LOVE YOU!!!

In the first photo- did you ride Pico in the 2013 Tevis?
I am interested in him at Global Endurance and thought it would be nice to ask how he is!?
thx, Elle

Elle, I didn't ride him, Nathalie from Ecuador did. email me merri @ endurance . net and I can put you in touch with her. - merri