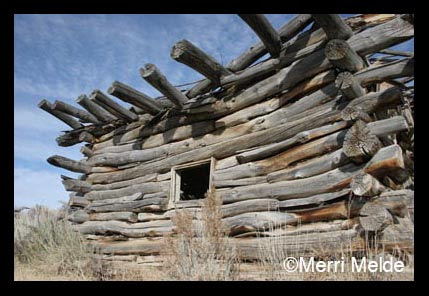 Far down a dirt back road off a gravel back road at the foot of the Owyhee mountains, hidden back in a fold of hills on a sometimes-dry, sometimes-flowing creek, lie the remains of an old… something. You wouldn't know anything is there back off the road but for the Lombardy poplars, (also known as 'Mormon poplars', as the fast growing species was popular with Mormon settlers) which are almost always markers of old homesteads out here in the Owyhee desert.

I've heard it called a stage stop; but after finding nothing referring to a stage stop in that area, and after a lot of snooping on maps and the internet and in books, I suspect it might have been an old homestead belonging to Tommy Doyle, "an early day horseman who lived in the vicinity," according to Helen Netteton's "Sketches of Owyhee County" book. Doyle Mountain is nearby, which must be named for him.

There's a "Thomas Doyle, rancher," listed in the "1898 Directory of residents and businesses" of Owyhee County. His name is not found in any Owyhee Avalanche newspapers between 1865 and 1905… perhaps that means he was too busy ranching and horsing around (literally) to be involved in any scandals or great deeds or anything in between.

But "early day horseman" sounds intriguing. I've been unable to find anything else so far on this Tommy Doyle. Now I'm on a mission.

Posted by The Equestrian Vagabond at 9:58 PM