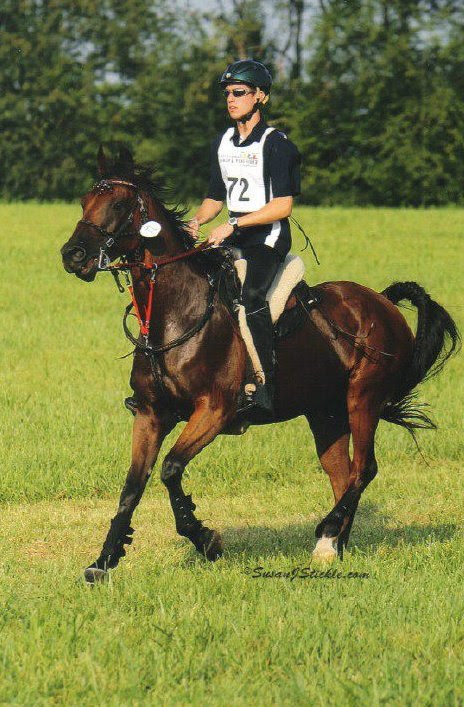 The timing is a bit inconvenient for the Junior at Penn State University. "I leave on the 4th for Abu Dhabi, miss a week of school, get back on the 12th and have finals that week."

But, Steven Hay, an environmental resource management and engineering major, is willing to make the sacrifice. He is one of four riders representing the USA in the Young Rider/Junior World Endurance Championship in the UAE on December 10th.

"I'm terribly excited. I'm thrilled to have this opportunity!"

Steven will say it's his grandmother who is ultimately responsible for this ride of a lifetime. "She always had horses; I always thought they were fascinating." He first started riding lessons when he was 6 years old. As his riding skills developed, he tried showing, but that was "not really interesting" to him. "A neighbor of mine did CTR (Competitive Trail Riding) and I tried that, and that led me to endurance."

Steven's first endurance ride was in 2003, and since then, he's logged 2770 miles, including a 10th place finish in the Biltmore 100 in 2009 on his horse Twenty Four Carrots. It was their fourth attempt at a hundred together (they finished the Vermont 100 in 2008), and his most memorable ride. "We were on the last loop; it got dark, and our group slowed down. My horse went in front and picked it up and led the way in the dark. It was such a great feeling of having such a strong horse at the end of 100 miles. I didn't even know we'd finished 10th!"

While Steven had always had an interest in riding internationally some time in the future, he never expected the opportunity to come so soon. Only a couple of months ago, he found out he would just make the age limit allowing him to compete in the Championship in Abu Dhabi this year (Young Riders are up to 21 years of age). And while he has his own horses, he couldn't afford to passport them; and anyway, none of them were quite up to the international level of competition.

Enter fellow Northeast endurance rider Natalie Muzzio and her horse Khalil Asam. "I was talking to Natalie about it on the phone one day ... and, well, here we are!"

Steven and Khalil had already gotten to know each other quite well after five endurance rides together over the last 2 years, which included 5 Top Ten finishes, 1 Best Condition, and 2 Individual Bronze Medals (both in the North American Young Riders Championshipa). "He's a very motivated horse. He has quite the work ethic. When I get on him, he seems to know me: 'We have business to take care of!' " The 10-year-old gelding is, however, a handful. "I wouldn't say he's easy to ride," Steven says, "but he's a great horse, a phenomenal athlete."

It's the first time Steven and his fellow Junior and Young Rider team members have ridden in international competition other than the 2011 Adequan/FEI North American Junior & Young Rider Championships in Kentucky. It is in fact Steven's first time out of the country. "We're expecting a different ball game over there. It's not going to be your normal backyard endurance ride.

"But we are going over to have a good experience, absorb, see what it's like to compete internationally. We're hoping for a good race, and have our horses come out of it well."

Thoughts of school and finals will be on the backburner for a week during this endurance experience of a lifetime, representing his country in the Championship.

"It's really quite an honor!"


top photo by Susan Stickle
Posted by The Equestrian Vagabond at 6:44 PM