Jeremy Reynolds might not remember this, but there was a time when he wasn't so enamored by the sport of endurance riding.

It was around 10 years ago when he started riding endurance horses for Jackie Bumgardner in Ridgecrest, California. Jackie didn't train her horses fast; just put a lot of long slow distance base miles on them. A group of us were in the middle of a 20 mile training ride out in the Mojave desert, steadily trotting along, when Jeremy asked, "Don't you ever get bored?"

Then one day in June of 2001, he followed a pretty girl on a 50-mile ride and the rest is history. Heather Bergantz and Jeremy got married, and he and Heather are now one of the top endurance stables/trainers/riders in the country (not to mention their international riding adventures).

Heather started endurance in 1988 and has over 16,000 AERC miles; Jeremy now has over 7800 miles - that's not counting the slew of international rides they've both done. (Heather most recently won the July 120-km** Euston park ride on one of Shaikh Mohammed's horses over next year's World Endurance Championship course.)

After the finish of the 100-mile North American Team Endurance Challenge Saturday - an all-out sprint for the finish line with Meg Sleeper and a narrow win - Jeremy probably doesn't find the sport of endurance boring anymore.

Coming into the ride, his horse, A Kutt Above, had 8 completions in 11 starts and 3 BCs. The pair was coming off a close second place finish (by a minute) to Lindsay Graham and Monk on July 30 over a flatter course very near here where both Kutt and Monk finished the 100 miles in under 7 hours. Before that, Kutt was pulled for metabolics in June at the Ft Howes 100, and he finished first in the 20 Mule Team 100 in February. 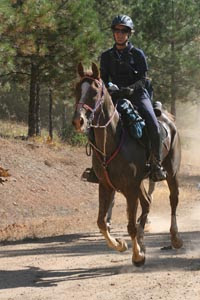 Monk was 21 for 21 in AERC competitions over his 4-year career with 5 BCs. His only pull is last year's World Endurance Championship in Kentucky. Before his sub-7 hour win in July, he'd finished 1st (and got BC) in the 75-mile NASTR in June, finished 2nd in the 50-mile Cache Creek Ridge Ride in May, and finished 21st in the 50-mile Nevada Derby in April.

Another experienced international competitor from the northeast, Meg Sleeper, brought Syrocco Reveille. The 11-year-old mare has nothing but Top Ten finishes in every ride over the last 3 years, with her last race being a 3rd place finish in the 100-mile Fort Howes ride in June. (Meg and Syrocco Reveille were riding with Jan Worthington and Golden Lightning in the 2008 World Endurance Championship in Malaysia when the lightning bolt knocked all 4 of them to the ground.)

A few riders rode as individuals, including former multiple champion Becky Hart on No Repeat. Becky served as the US Chef d'Equipe the last couple of years and is now back to riding. Seriously. Her little gelding No Repeat (who can't be an inch over 14.2 hands), a son of Wiking, is 17 for 19 over the last 3 years with 2 Best Condition awards. His last race this year was a 7:20-hour 100, where they finished 3rd to Monk and A Kutt Above in July. The duo won their race before that, the 75-mile Buck Meadows Boogie in April - in 7:30. (Note they went 25 miles further in the hundred, and took 10 less minutes to do that!) 43 horses crossed the starting line for the NAETC at 6:30 AM. The first loop, 13 miles to an out vet check was a long hard climb to an out vet check, but the pace was cracking fast. First in were Jeremy and Heather Reynolds and, somewhat surprisingly, Lisa Green from the Northeast. A Kutt Above pulsed down a minute before Heather's mount Destiny Gold (owned by Valerie Kanavy). Closely behind were Doug Swingley on Pal of Mine, Meg Sleeper, Christoph Schork on Stars Aflame, Becky Hart, and Cheryl Dell on TR Reason to Believe. Reason and Cheryl took a tumble on the trail; Reason got  bloody knee, but it didn't bother him throughout the day.

Lindsay Graham and Monk would go out of this vet check 9 minutes after the leader. Owner Chris Martin had BIG butterflies in his stomach. Lindsay's dad Steve knew all about butterflies... but he said after the first vet check they would all feel better. "Monk always gets stronger after the first 50 miles, and it was early in the day," Chris said.

Two horse were pulled here for lameness: Lynn Lee's RS Silverado, and Carol Giles' SAR Tiki Galaxy. The mother-daughter duo of Karen and Jessica DiCamillo were the final two out of the vet check. The next loop was 24 miles back to camp. Doug Swingley on Pal of Mine and Christoph Schork on Stars Aflame came in together. Stars Aflame and Christoph last won and got Best Condition on the 100-mile AERC National Championship in New Mexico a month ago. She'd also finished first in her other three 50-mile rides (plus another BC) this year. The mare stumbled and fell to the ground coming down a hill; fortunately Christoph was off her and running on foot at the time.

Doug is a relative newcomer to endurance riding after leaving the sport of dog sledding.  Since 2006, he's already racked up 4100 miles. Pal of Mine has completed 12 of 14 rides over 4 seasons with 2 Best Conditions. He's completed 2 50's this year, the last being a win and BC in August.

Stars Aflame's pulse was down when she entered the vet ring, but it spiked back up during her vetting. She had to go out of the ring and represent, and lost 11 minutes in the process, dropping her down to 4th.

'The Cluster' was close behind Doug and Christoph - a tight group of Jeremy, Heather, Becky, and Meg. Lindsay and Christoph would be also be in this top group much of the rest of the day, in various order.

Heather's Destiny Gold was pulled for lameness at this vet check, and she jumped right into crewing for Jeremy and the Pac South team. Ceci Butler-Stasiuk and KJB Cytron Kon JMS were also pulled at this Vet Check.

Loop 3 was a 13 mile loop back into camp. Doug remained a minute  in the lead with a variation of The Cluster close behind him. Lindsay and Monk left on Loop 4 only 9 minutes behind the leader. With 50 miles down and 50 to go, Team Monk was happy with his positioning and condition.

Mary Kathryn Clark - 1 of 4 Young Riders in the ride - and CRR FC Lantana were pulled. She was one of three riding for the Southeast team; it knocked them out of the team medals. "That mountain killed her," Mary Katherine said of her mare. "She had an issue yesterday, but we thought we fixed it." Christoph and Stars Aflame were a pull. Great Britain rider Dominique Freeman started onto loop 4, but she turned around and pulled her horse Rising Heat as a rider option. She and Romanian Radu Ciubuc had been riding together; he went on his own with his horse HC Ashtar. 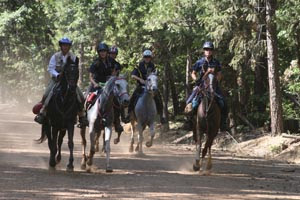 Loop 4 was 15 miles to an out vet check. Doug Swingley smoked this section, increasing his lead to 7 minutes over The Cluster of Meg, Jeremy, Becky, Lindsay and Cheryl. Crewing was madness. A few tempers flared. A few buckets flew. A few people got wet. All while trying to get the horses' pulses down.

Christoph and Stars Aflame were pulled, as were Northeast's Melody Blittersdorf and Lun-nor Sovereign.

Swedish rider Caroline Franzen was having a good ride, while finding her mount National Security, owned by Doug Swingley, "interesting to ride." He'd smacked her in the forehead at one of the basecamp vet checks and bloodied her lip. It gave her a mini-concussion and she threw up a couple of times. 'Nash' also kicked Suzy Hayes during the ride. Caroline agreed that Nash is a 'bit of a character.' Golden Lightning was still looking good at this point, but Jan Worthington wasn't feeling great about the course. "I'm pounding him! The ground is so hard!" She was considering pulling 'Leon' as a Rider Option. Much of the course was over hard dirt roads, and there were a lot of rocks in places. She and Grace Worthington prefer the heat and humidity of home in Illinois. "It's not so dry there; the ground isn't as hard. We have Dirt!"

The timing for the ride - all done by hand on paper - started to get interesting for the volunteers, as the leaders were already out on Loop 5 before some of the back-of-pack riders had come into Vet Check 4. Meg and Jeremy were the first in the vet gate. Monk presented 3 minutes later. That was the order they'd be going out on the last 13 mile loop home, with Becky and No Repeat out at the same time as Lindsay.

But Lindsay was backing off. "We did that last loop too fast, they were all very competitive together. We're not going to try to catch them." Indeed, Jeremy and Meg set out together, with Becky 3 minutes behind, while Monk went off to a spot of grass and grazed a while.

There was a lot of speculation waiting at the finish line as to who would be together at the finish... would Jeremy and Meg still be together, and would Becky Hart catch up with them? By the time someone said "Here they come," both Jeremy and Meg were sprinting full out for the wire. The ground was a bit rough coming to the line... a bit downhill, a bit rocky, and a dip, and A Kutt Above blasted over it all, leaving a trail of dust from his flying hooves, and with a grin on Jeremy's face, they bested Meg and Reveille by a couple of lengths. Both of them bested the course record, 8:17.33 (and 8:17.34 for Reveille). Becky Hart and No Repeat finished third, 21 minutes behind. Doug Swingley and Pal of Mine held onto fourth, 38 minutes behind the winner. Lindsay and Monk finished fifth... but were sadly pulled lame at the finish.

Another 21 minutes later a slew of 9 riders came in almost together, including McCamey Kimbler on PL Nino in 10th - the youngest rider at the ride, and Jan Worthington and Golden Lightning in 11th - the oldest rider at the ride. There was a 3 hour 1 minute spread between the Top Ten. Two more were pulled at the finish: Kathy Brunjes and Frontier Random, and Nicole Smith on Ravenwood Shahbar. Tough luck after going all the way.

"They should all be lame after that course!" one rider said the next morning. It was hard - and lots of rocks!" But despite the tough mountain course, 31 of 43 riders completed the course, a 72% finish percentage - rather astounding for a fast FEI ride that set a course record. The team medal competition was a big factor in that. It kept everybody guessing all night. Six horses showed next morning for Best Condition. Four looked very good, and it was Becky Hart's No Repeat that won. Becky was pretty thrilled. Looks like the former World Champion has a nice little horse on her hands.


Posted by The Equestrian Vagabond at 8:25 PM

I posted this on ridecamp but want everyone to know what Jeremy Reynolds did in the middle of this very important race, and it was a race. Merri pretty much laid out the race scene, so if you can picture Jeremy jumping off his horse in the middle of one of the loops to retrieve a stirrup lost by the rider in FRONT of him. That rider was Lindsay Graham and my horse MONK. I know Jeremy and I are friends but this goes way beyond what a normal person would do in the middle of a high profile race where every second counts. My hat and my heart goes out to this fine young competitor.