The juvenile gang showed up a couple of weeks ago out of the blue: six bold, raucous, rowdy young Ravens perching in a dead tree one evening, surveying their new turf.

They're like rambunctious teenagers, punk hats sideways on their heads, pants down below their knees - they swagger, they strut about; they shriek, they yell; there's nothing subtle about them - and why should there be? At this age, they know everything and they let the world know they know everything. Delightfully irreverent, every morning they wake the dead (and the living) before dawn, hollering at the universe to look out because they're coming. They experiment and play - any toy will do. One Raven breaks a tiny stick off a tree; 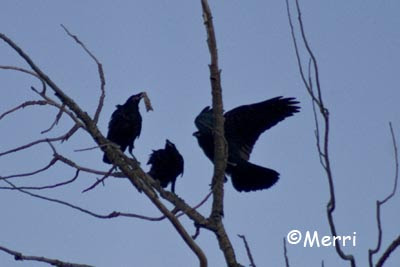 another hops close to try and take it; another Raven breaks off his own stick and plays with it 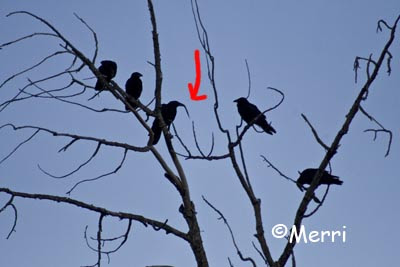 till the first Raven drops his and hops over to try and take the other Raven's stick.

I walk beneath their tree every evening before they fall asleep, tossing out dog food nibbles. Do they eat it in the morning? I don't know, but they watch me. They are imperiously untouchable. One morning they left behind a huge feather for me as a token of their illustrious Ravenness. 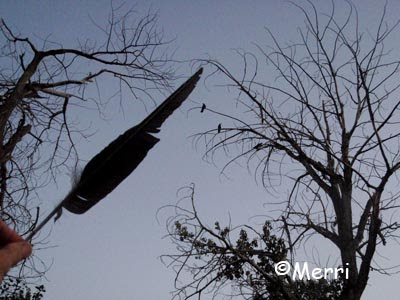 They are acrobats in the air and taking off and screaming their encouragement to each other. On a sudden whim, they all scatter, shooting across the sky, strewing like sun rays; they reconvene as one to a tree to discuss things, shouting opinions, yelling thoughts, rawking discoveries, muttering comments, murmuring secrets, burbling stories, knocking their magnificence.

They scuffle, they argue; they say sweet things, they cuddle. They entertain. They delight.

They bring great luck with their presence, these six rowdy Ravens. *Worth noting: I borrowed part of my title from Evon Zerbetz's marvelous illustrated book Ten Rowdy Ravens. She also illustrated Dog Days, Raven Nights, by John and Colleen Marzluff, which I'm reading now.
Posted by The Equestrian Vagabond at 8:42 PM