70% chance of showers, and yet there is not a cloud in the blue sky, as we saddle up again for an 8 AM start - Jose and me and The Raven, for Day 3 of the Owyhee Fandango, 60 miles, to the Petroglyphs by the Snake River and back. The wind is chilly and brisk as an autumn day as we head out to the northeast, with John and Rushcreek Mac, and Ben and Batman in our wake. Clouds have already blown over some of the Owhyee mountain peaks, but the lighting is brilliant, making the blue sky brighter and the Owyhee mountains darker and the wildflowers vibrant. It is great to be alive today and riding Jose on another endurance ride in the Wild West. Jose feels as fresh as he did when I saddled him yesterday morning. We cross the highway where the radio guys and gals take our numbers, and we continue on toward the Snake River. A sheet of tiny golden flowers covers the lower reaches of the Badlandic striated hills that overlook the Oregon Trail. We turn with the wind and follow the old trail, our hoofsteps blending with those of horses and mules from 150 years ago.

After 14 miles and two hours we arrive at the Sierra del Rio ranch - through which the Oregon trail travels - and we have a 30 minute vet check. The ranch had originally closed it to us because of the EHV-1 virus going around - and one can understand a working ranch doing such a thing - but after talking with our head veterinarian Robert Washington, they changed their mind, and generously let us not only pass through their ranch but use one of their lush grassy fields for our vet checks. The horses loved it - they almost passed up their dishes of grain for the green grass. The Ranch even set out a couple of big water troughs for the horses to drink out of. 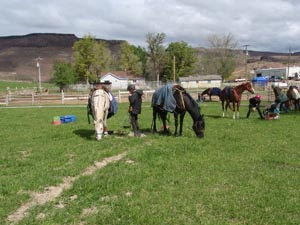 At the ranch, some of the 80 and 100 milers are resting at their second vet check. They'd already done a 20 mile loop and a vet check at home before heading out here. From here, the LD riders turn around to ride home; the rest of the distances, 100, 80, and 60 milers, do an out-and-back loop to the petroglyph boulders along the Snake River. Annerose asks to join us. She fell off her horse at 7 miles - fell hard onto the road when Ginger spooked at a tumbleweed. Annerose hurt, among other things, her back and her hand and maybe her kidney - and she got back on and continued to ride. Annerose is 73. Yesterday she reached 11,000 endurance miles. She's the only one who, if she finishes, will have completed all 3 days on the same horse. And Ginger will be 10 miles away from 6000 miles. Annerose is tough. And stubborn. "My father comes form Westphalia in Germany," she says in her still-heavy-German-accented English, "and they are known as the most stubborn people. I guess that's where I got it from."

After our hold the four of us mount up and climb out of the canyon on the old Oregon Trail wagon road up onto the flats, straight into the wind. I hate the wind, but today, it doesn't bother me. It sure doesn't bother Jose - he charges right into it, ears pricked forward, setting a strong and steady trot and seeming to know exactly where he is going. He doesn't try to take the shortcuts home - he's working today and he knows his job. I swear the horse is following the pink ribbons on his own. We get our first glimpse of the Snake River Canyon on the rim - we will be riding down into that canyon soon.

The only time Jose consents to stop is when everyone else behind him has stopped (especially Mac) to eat some of the delicious bunch grass below Sinker Butte. Mac is intent on gaining weight during this ride.

Our trail follows the base of Sinker Butte before turning onto the road that leads down, down, down to the Snake. Jose and Ginger lose Mac and Batman to the knee-high grass lining the road. It invites gluttony, and Jose stuffs as much grass as he can in his mouth while waiting for his trail partners. We trot alongside the Snake for many miles, the flood-water-carved cliffs lining the way and the cacophony of birdsong harmonizing with the wind blasting in our ears. There is an abundance of waterfowl and grassland birds; raptors inhabit cliff nests; cliff swallows swarm in places; and a big Disappointment of Ravens (that's what a group of Ravens is called... but they are never disappointing!) cavort in the wind gusts. My riding Raven is, as always, enjoying his cavort with Jose. 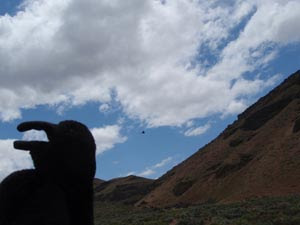 We meet riders on the out-and-back trail: Jennifer and mother Joyce, leading the 100-miler, with Lee Pearce, leading the 60 miler. We meet Steph and our stablemate Rhett, who freezes like a statue when he sees us coming at him. He is terribly disappointed that he must continue on without us, and while our horses continue on their business toward the petroglyphs, Rhett's pathetic whinnies can be heard echoing up and down the canyon. 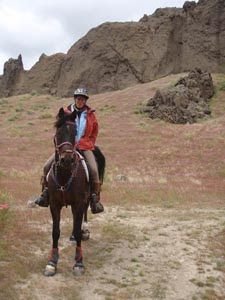 Steph has flagged a fun loop through the petroglyph boulders, I've never seen so many of them because we usually only ride a trail past only 3 or 4 of the carved boulders. When Lake Bonneville in the Great Salt Lake, Utah, area breached its natural dam 14,000 years ago, its waters tore down the Snake River, slicing gorges, stripping sediments and debris, and throwing "melon gravel" about - huge, car-sized boulders so named because of their resemblance to big watermelons. Rolled and smoothed and polished and tossed around by the great powerful floodwaters, the boulders now litter various places along the river, planted in limbo until the next Great Flood comes to move forcibly evict them to their new homes.

Some of these boulders served as art canvases for the Native Americans that wintered along the Snake - some of the petroglyphs have been dated back 11,000 years. Their meanings are still unclear, but the art is unmistakable.


We turn and retrace our steps back along the same trail, the wind at our backs, the scenery completely different. There even seems to be less rock underfoot in this direction. We fly along, and soon we are back at the long uphill climb out of the canyon.

The wind is still going full blast up on the flats. The trails have become dusty now. Through half-closed eyes, we stop to eat more of the bunch grass along the way. We follow the same Oregon Trail with its century-and-a-half old wagon ruts, back down to the Sierra del Rio ranch for our hour hold. We rest in the sun - Annerose is tired and hurting now - but still stubborn. We only have 14 miles to go, and she wouldn't quit now if she had to walk in on foot. Annerose and I pair off, leaving John and Ben to ride together. Batman has become such a handful for Ben that Ben broke a rein trying to hold him back. We figure Batman'll be calmer with one other horse on the way home, instead of 3 to compete with. Dark storm clouds have gathered over the Owhyees and lay directly between us and home. Neither Annerose nor I are capable of hearing thunder unless it's right upon us, and to me those clouds look a bit suspicious. By the time we cross the highway, with 6 miles left to home, I am getting a little nervous. When Annerose says, "That looks dangerous," that settles it! We've been trotting, and now we trot and canter, fast, for 5 miles without stopping. I'm hoping Annerose is staying on behind me because I do not want to stop.

I am half scared and half enchanted with this storm (my camera battery has died). Jose and I are hurtling down the road, heading straight into a black wall of low clouds. We are intent upon getting to the Bates Creek Rim, down off this flat, out of this storm cloud we are staring down. I marvel at Jose's limitless strength - his hundredth mile is like his first. I cannot believe this horse has gone almost 110 miles in the last two days, so eagerly and easily. Rain drenches the desert, horses and riders. Jose bows his head against the spitting raindrops, but does not skip a beat, as we soar into the black cloud. My horse flies without wings. His hooves lightly skim the earth, he swiftly moves unfalteringly forward, not in a race to get home, but to dance in the Owyhee storm.
Posted by The Equestrian Vagabond at 4:09 PM