The Little Princess Goes To School 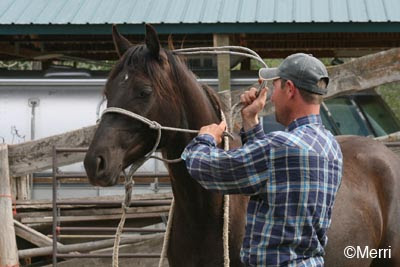 'Little' Smokey - the daughter of Princess, is 2. And big. But really, still a baby. She hasn't been asked to do much of anything her whole life other than leading, and standing tied, and getting her feet trimmed. She has been allowed to grow up and develop, physically and mentally, be a horse on a lot of acreage - footloose and fancy free... until today.

Andy and his wife Gloria came to pick up Smokey - Steph is sending her off to school at Andy's for a couple of weeks of basic training. Smokey had never been in a trailer before. Ever. I've seen glimpses of a bit of Stubborn in her, when she doesn't get her way. Today would be her biggest challenge ever, to get in a trailer for the first time to go to Andy's house.

Andy's a local cowboy trainer - grew up here then left then came back - and he's already worked with a lot of local endurance riders' horses. He's very good with horses - gets them to do what he wants them to do, in a quiet, light-handed, but insistent way.

It didn't take too much asking from Andy to get Smokey to go up to the big scary trailer and stand there, and even start putting a foot 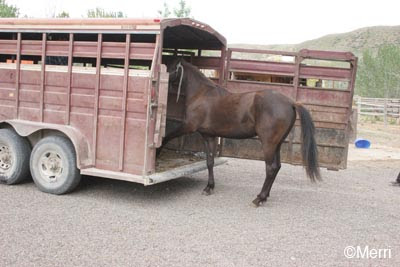 But then, she decided she didn't want to go in that trailer. And when Smokey doesn't want to do something, she can indeed be stubborn about it. She started making a big deal out of it, backing up, then wanting to get away from it all. Andy simply started asking her to go in circles around him. He used a lunge whip, either flicking it at her hind feet or butt, or tapping her on the butt with it, gently but insistently. She didn't want to do that, either, clamping her tail down and freezing before leaping forward. It took some time. Smokey thought she could out-stubborn Andy, but he kept asking her to move her feet. She tried everything she could think of to just get away from the situation - she tried yanking away, she tried lunging at Andy, she tried almost falling over, she even double-barreled at him, but Andy just kept asking her to move - move - move in a circle around him. The harder she resisted, the more effort he asked her to put into moving around him. Her only respite was a quiet space right in front of the trailer. As long as she stopped and stood quietly right there, she got to stand there and rest. He'd then ask her to step into the trailer; and as long as she made an effort to move forward - give in to the pressure on her head, or move a foot forward and relax, she got to stand there. As soon as she resisted - threw her head up or backed up, Andy asked her to go back to moving her feet around him, move, move, move.

Andy kept the same patient demeanor: just kept asking her for a response, releasing when she gave, and when she resisted, he just asked her for more effort in moving forward.

It took about an hour - time for a thunderhead to build and completely cover the sky, with thunder rumbling overhead - before Smokey really gave in to moving around Andy without resistance - no tail tucking, no crowding Andy, no pulling on the rope. She was wet with sweat. Ten feet away from the trailer, Andy asked her to walk around him (she no longer needed to trot, because she was no longer resisting), and he then straightened her out and walked toward the trailer on a loose lead rope, and she walked right into it without any hesitation. It's a matter of making the horse move forward. "You can't get a horse to do anything without forward motion," Andy said. "It's hard to get a green horse to back up from a standstill. First you get his feet moving forward, then you ask him to back up." Then same was true for Smokey - it was hard for her to just stand still at the trailer door and lift up her feet one by one and step inside (especially the first time) - so once he got her willingly moving forward without resistance, it made it easy for her to keep walking right into the trailer.

Andy left Smokey to stand in the trailer for a bit, then he led her out - she leaped out of there - then he circled her a few more times and led her back to the trailer and she walked right in again. This time he stepped inside with her and had Gloria close the door. They stood in there a while quietly; and when Gloria opened the door and Andy walked out with Smokey, the filly stepped out beside him calmly. They walked to the side of the truck and trailer (a new spot), where Andy asked Smokey to step around him in circles. She did this quietly, calmly; and Andy led/drove her along the side of the trailer, to the door, where she turned and on her own hopped right into the trailer. He left her in there a while by herself. Then he did it twice more: leading her out (calmly) and away from the trailer, then letting her go back in (calmly and willingly) - and there you had a horse that will now willingly go into a horse trailer.

Princess Smokey's whole perception of the world changed today - Boot Camp has begun!
Posted by The Equestrian Vagabond at 8:33 PM