Hay is, of course, the number one choice. The alfalfa hay is for special horses or occasions (like skinny ones who need weight, warmth, or who get crowded off the hay). Anybody who can scam some grain is thrilled. The salt licks are popular.

The herd really isn't interested now in going up the canyon, but when I do coax them up there, they spend a few hours picking around.

They'll choose a bit of cheatgrass, 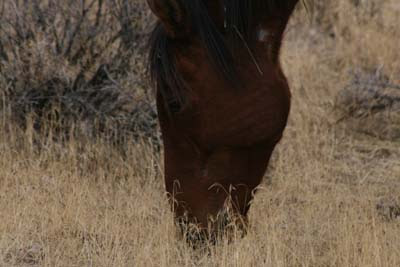 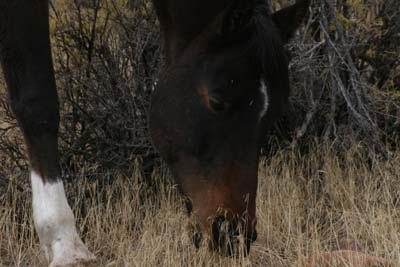 but they particularly go for the greasewood. I can't fathom why - it's prickly stuff and one of the reasons why cowboys around here wear chaps, and it's not something you'd choose to land in if you got tossed off your horse.

It's known to cause oxalate poisoning in sheep if eaten in large amounts, but it doesn't seem to adversely affect the horses. The plant absorbs large quantities of sodium salts, which must make the greasewood taste salty, though I can't detect it.

It's not so easy to eat, either. The horses curl their lips back and carefully strip off the minute leaves with their teeth. I expect they still get some prickly stems that must poke holes in their tongues and cheeks while chewing, but they seem to think it's worth the effort. 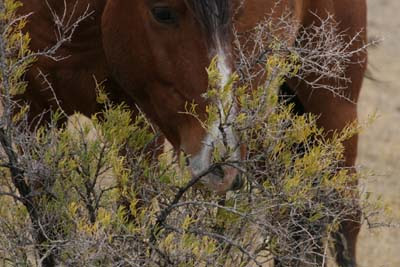 Posted by The Equestrian Vagabond at 6:09 PM

Horses will always choose what they NEED- if they have the chance to offset a lack in their diet-cool huh?