It's a floating voice in the dark from somewhere. Disorienting.

"Karen Bumgarner has an extra horse for you to ride today!"

Stagger out of bed. Fumble for riding clothes. Try to remember what they consist of. Need shoes. Don't forget the Raven. Stumble to the house for coffee. It helps a little, but boooooooooy are my bones tired and my body weary. But the trail calls. I must ride.

Karen saddles Thunder for her, Blue for me. We climb aboard, start out on the trail, head out for 50 miles of desert and gnats on the Oregon Trail and the Snake River - the Day 3 trail of the Owyhee Canyonlands. The orange morning sun crests the flats and throws our long-legged shadows halfway to the gold dust in the Owyhee mountains, as a trail of dust from previous horses beckons our way north across the horizon. Karen's riding Z Summer Thunder, a stocky chestnut with an attitude. It's the same Thunder who, in 2007, spooked and bolted then dumped Karen, broke her ribs, collapsed a lung and gave her a concussion, and ran away, and was lost for 6 days. Karen and Thunder have logged 1250 endurance miles since then, including 2 hundred-milers. You still have to pay attention riding him, and he'll still throw a good spook in now and then (when you ride past, say, a random door lying in the grass by a canal in the desert), but those two have become solid partners on their journey. 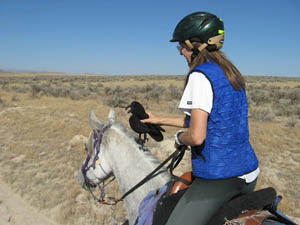 Z Blue Lightening had 6 rides to his name and was just waiting for someone to take him out again. Our friend Leonard Liesens, visiting from Belgium, rode him on Day 1; I get to ride him today. We follow trails and dirt roads toward the first vet check at the Sierra del Rio ranch. Blue's hoofbeats pound my Tired away, and his fluttering mane wipes away the thoughts of all the work I have yet to catch up on. The ride fills my veins like a drug. during their hold. Back out for a loop along the Oregon trail, swatting at the same gnats, breathing the same dust that the pioneers sucked down back in the 1850's. Did they appreciate the awesome views we still have? The Snake River gorge panorama is staggering. It's hot, but we have a bit of a breeze (and I have my great cool vest) to keep us on the slightly cooler side of boiling over. 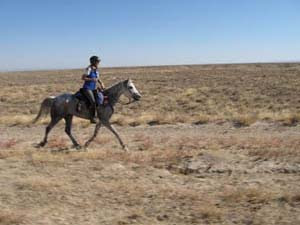 Back to the ranch for another hold and Conversations With Gnats, then back onto the trail heading for home. Blue and Thunder trade the lead as they cross the dusty desert trails, ears forward, interested, alert, steady, strong.

I am whooped when we are finished, but it's a different tired. It's 50 riding miles of tired - it's a good tired.

(Photos of me by Karen Bumgarner!
Posted by The Equestrian Vagabond at 6:56 PM