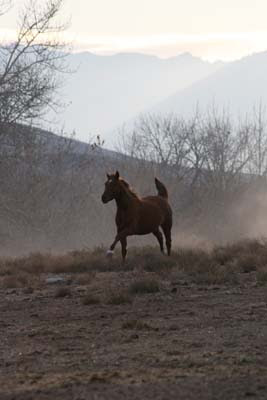 For one thing, I'm fixin' my rib. It's mending... really just annoying now at times rather than anything else. The prescription is plenty of exercise, extra calcium, and no more falling off horses.

For another thing, I'm fixin' Kazam, who broke my rib. The Great Rib Incident really isn't the problem, and didn't really contribute to what needs fixin' on Kazam, although dumping a rider and running 90 miles per hour for home in a panic on that day probably didn't make things any better.

What's broke on him is his self confidence. Though Kazam is Jose's half brother - calm, steady, smart, cool-headed Jose - Kazam isn't quite like that yet. He's sweet and smart and trustworthy on the ground, and he wants to be good under saddle... it's just a matter of translating that trust and self-assurance to riding.

The main cause is his sporadic riding and training. Due to various circumstances, Kazam has been a green horse for years - never graduated any further. Steph got him green-broke a couple of years ago, then he turned up lame, so he had time off. Connie started getting on him again last fall - at the time she had him boldly going out alone... and he went lame again so he had the winter off. Then nobody was around to put the time in riding him. He went to a trainer this summer for a month, then had more time off while I was gone. I started him back later this summer, and while I mostly rode him in company, he always had a traumatic time going out by himself. Then I left again for 2 weeks to Kentucky. When I got back, I rode him for 2 days, then went and fell off him and broke my rib. He had 6 weeks off.

I've started back on him again, and, since his biggest problem is going out by himself, that is all that we do. Every day.

And that's all we will do until he gets so comfortable with it that he dreams about wanting to do it. Some days are worse than others, but every day is better in some little way. Every day, he's a little less scared, or less reluctant, or less spooky; he's more relaxed or relaxed sooner, more able to control his panic. He does, however, know every shortcut home, just in case we get caught out in a heavy fog and I get lost.

This is what happened yesterday:

We were coming back home from a good ride. We crested our Tevis hill where we have a view of home. Kazam spotted his horse herd far up the pasture on this side of the creek - not a usual spot... and he started getting wound up thinking about it - Ohmigosh, the horses are not by the house, they are up there!!!!

He did keep his cool and remain responsive and controllable all the way home, but as soon as I unsaddled him and turned him loose, panic mode took over. He took off cantering up the pasture, over a hill and out of sight, whinnying for his mates. 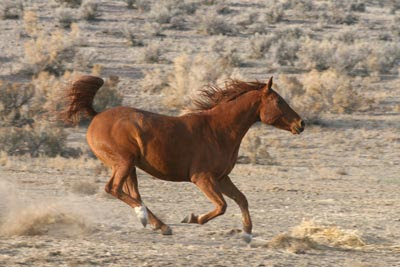 I turned away, figuring he'd cross the creek up there and join them, but then I heard a mighty roar. Here came Kazam - running back toward the house, 300 miles an hour - ohmigod! - whinnying in hysteria, every thundering stride stabbing his whinnies with panic.

I gasped and my heart stopped: shocking - thrilling - terrifying - exciting - all at the same time. I've never seen a horse run this fast, warp speed, not a Quarter Horse in a quarter-mile race out of the starting gate. (Although I did ride a rocket ship once in the Egyptian desert... but that's another story.) I cringed as Kazam got near the barn, afraid he'd just crash into it. He swerved and shot past it and on down the side of the mare pen, sat on his haunches, spun a 180, started sprinting back up the pasture, dropped and spun toward the creek, leaped over it, and headed for his herd, still whinnying up a frenzy. Ohmigod!

Meanwhile, Rhett was already trotting back in this direction to see what the heck was going on - I could see a collision coming! But somehow they all jumbled seamlessly together and caught the electric current and became one tempest, typhooning back my way, blasting across the creek, cutting the corner of the barn at a tilt to the front pen (Stormy the fat boy much slower behind them, and carefully crossing the rocky creek), where they skillfully whirled and ducked and dodged each other in a great upheaval of dust - bucked, wheeled, reared, piaffed, spun, and head-down-double-barrelled in the air, just because they had four legs and they could. An exuberant herd romp!

And suddenly all was calm. One last snort. Sides heaved. Heads dropped to graze. Like nothing had happened. My heart finally jump-started and I drew breath again. Ohmigod!

This is what I'm working to prevent Kazam from doing under saddle.

On his daily solo rides away from the house, it takes a lot of time and patience. I always have a plan, but I don't always stick to it, depending on how he's doing each day. We never go the same way twice; we never rush; I never force him but rather ask him to do something, and make it so he can only want to do what I ask. Every horse is different, so I'm still learning what works best on him to get the best response. We follow trails and washes, and we ride cross-country. We climb hills, because Kazam is not an uphill horse (yet). We practice opening gates... he is getting almost as good as ranch horse Mac and once-upon-a-time dude ranch horse Stormy. When Kazam stops to graze out on the trail, I know he's really relaxed. When he passes by something scary without letting it scare him, he knows he's done good.

That's our homework for the Owyhee winter. Posted by The Equestrian Vagabond at 7:44 PM