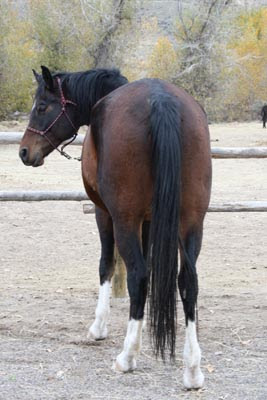 Who is this slim, shapely, handsome beast? Could this be Dudley, the perennial overweight buffalo-fat lard-butt pudgeball?

No matter what kind of diet he's been on, he can just gaze longingly at the big hay bales behind the fence and it goes straight to his hips. And everywhere else.

So in addition to putting him on a strict diet (AGAIN), we started him on this D-Carb Balance formula. It's for Insulin Resistant horses (we suspect Dudley is), laminitic horses (Dudley's had several episodes), and obese horses (DUDLEY).

The D-Carb is supposed to help the body use the feed as energy instead of storing it as fat. We started him on it on mid-September; he was in a large pen with Finneas - who drove him all day (somehow Finneas thinks it keeps the flies off his face to drive Dudley around all day long). They probably walked at least 10 miles a day, so Dudley was getting plenty of exercise, along with his diet of hay only, and the D-Carb. 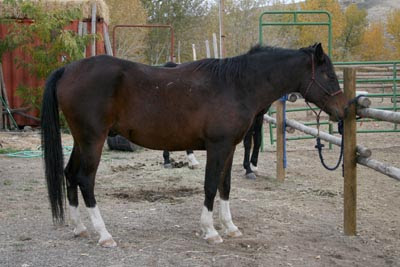 During the 5-day Canyonlands Ride, Dudley was stuck in a small pen for about 8 days, and I thought he was getting a little slimmer, though that had to be my imagination, because he was getting zero exercise.

After the ride, he was turned back out to plenty of roaming around. I was gone for two weeks, and I come back to see: hipbones! Dudley has hipbones! And a neck that is not so cresty. The fat dimples over his butt are almost a memory. He's a horse that looks like... well, a horse! I want to say he's not even so obsessed over food, because there are times I see him up the canyon just standing there and hanging out, and not looking for food, scheming for food, escaping for food, or scheming to escape for food.

I'm not saying this D-Carb stuff is a miracle, and I'm the world's greatest devil's advocate and skeptic, but, Dudley the Beefalo, for whatever reasons, is becoming Dudley Slim Jim. 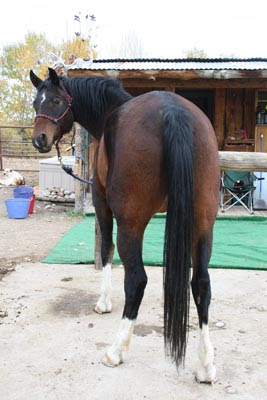 Posted by The Equestrian Vagabond at 7:44 AM

WOW I wonder if the not food obsessed part would work for Joy. She acted up ( like a panicked fool) once in front of a non-horsey mom at the riding lessons because I gave her a treat from the saddle bag and she wanted it all NOW. ps looking buff Dudley

He looks great. I need that for Baby Calypso the swollen tic. cole

ok do you have anything that works well for a thin 19 Anglo-arab? He is wormed monthly grained 2x a day. He has hay infront of him 24 7. We scopped him for ulcers. We are working with a vet. But still very little weight gain. cole