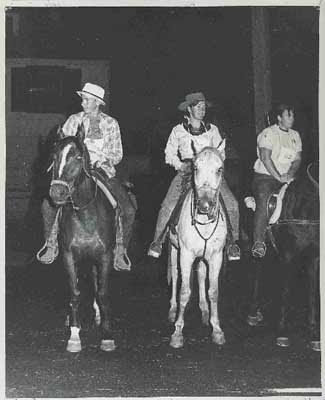 
He still gets nervous, even though he's got silver Tevis buckles coming out of his ears, and Tevis dust flowing through his veins, and his finish record is way above the finish average of just over 50%. You'd think he'd have it all down pat by now.

"Tevis is a tall order. It's tough, tackling 23,000' of down and 19,000' of climbing; it's a hard reality. The Sierra Nevadas are beautiful, but daunting. It's in the middle of summer and hot - you know what's before you, but it can still defeat you."

"Each horse is a unique athlete; you play to their strengths and seek to improve their weaknesses. It can take 6 months, or even years or more to get a horse to Tevis. Usually it's a three year project, from the time the horse starts endurance at 5 or 6, until by the time they are 7 or 8, it's time to try Tevis." He's noticed a commonality among his Tevis finishers, and that's a bond he usually develops with them, after months of training and then getting through the Tevis.

And why does Hal ride the Tevis year after year?

"It all started with the Tevis. I grew up with it; it was the center of my universe for some time. Fortunately I started early, grew up with horsemen and women I learned from, then applied what I learned. Of all the endurance competetions around the world - and I've travelled the world for endurance - Tevis still ranks the highest, and is the most demanding of horsemen and women."

Some years he's taken a sabbatical because he just wasn't up to the months of training and sacrifice - "sometimes I just wasn't in the right frame of mind" - but he always comes back to it, as long as he has a horse that is willing and able.

Hal and his wife Ann (who's won 7 Tevis buckles herself) also train horses for Mr Seiichi Hasumi of Japan, who this year is riding for his 6th consecutive buckle. Mr Hasumi had seen a TV documentary in Japan on the Tevis cup 10 years ago, and decided that's what he wanted to do during his retirement years. Not too many people choose that 'relaxing' path for their retirement.

On Saturday, Hal will be riding his new horse, Dreamm On, for the first time. Hal was looking for a new horse to replace his mare that he had to retire, and Dreamm On fit the bill. "He's a veteran of the sport. Caution will be my approach this year, since it will be our first ride together; but I know he is ready for it."

Hall will be a familiar sight at the starting line, on the trail, and hopefully at the finish. "As long as Tevis is something of a learning curve and adventure, I'll keep doing it."

And he'll likely keep adding buckles to his collection.
Posted by The Equestrian Vagabond at 6:13 PM