You Can Rest When You Die! (Not When You Break Your Toe) 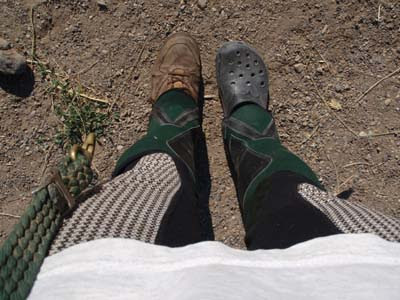 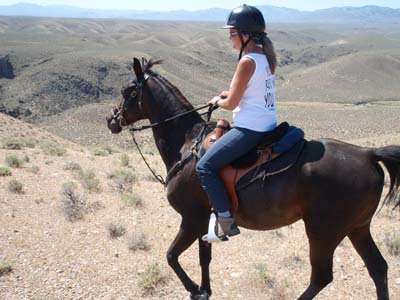 So said the back of Janis' shirt (all except the Toe stuff) when we rode off on a 25 mile loop today.

I just couldn't stand it, after missing two 50-mile rides in our back yard (the Almosta Bennett Hills ride), and Janis saying she was going out on a long ride today, so
I just had to go riding with her. This morning I got a bigger sized Croc shoe from Steph and stuffed my right foot in. Yowza. That's when I got the notion that maybe I didn't just rip the toenail off my foot when I got stepped on, but maybe I broke the dang toe too.

Whoooeeeee it hurt and I didn't think there was any way I'd be able to put my foot in the stirrup (hitting the side of the stirrup, putting weight in the stirrup, etc). But it was SUCH a nice day, and Janis was already on her horse Cole heading my way at a canter, the Owyhee mountains in the background framing them, Cole's mane flying in the breeze and Janis grinning, and that clinched it. I was riding.

I hobbled out to catch Jose, limped about getting him ready, and whimpered as I stood on my bad foot to mount. I awkwardly hauled myself up into the saddle (sorry, Jose!), placed my poor toe in the big shoe into the stirrup... and off we went!

It hurt, sometimes a lot, but, who cared! A cooling breeze refreshed us as we trotted north on Steph's ridge; and the view into Hart Creek along the Rim Trail as we headed south on the next ridge made up for the rising temperature. We turned back north and descended the sharp ridge down into Hart Creek, where the horses gulped cool water, and then I almost guided Jose over a rattlesnake at the old Homestead! He saw it before I did and jumped out of the way.

Normally when I ride this loop I'm going the other direction, so this was almost like a new trail today. And I don't know if Jose has ever been this direction - things looked different and interesting to him too, and he had one big spook when we came around a corner and saw a dead log on his left. Sure, we've seen that dozens of times from the right side, but not the left!

I found a long snake skin on the ground (going into a little burrow - did the snake just slide out of his skin when he slithered inside?), and, a GPS! Actually Jose must have spotted it because he stopped right there to get some grass, so I could hop off him and pick it up. So now Jose has his own GPS.

We followed Hart Creek (soon it became dry - the water was diverted) to the Potato Field (full of flowering potato plants this year), and when we turned for home we had another nice breeze at our back.

By now the drinking water in our saddle bags was hot, the day was starting to cook, so it was good to be getting back home when we did. The boys stood in Pickett Creek - which was 10* cooler than anywhere else - for a while and took a deep drink right at the barn.

When I dismounted, I had to lower myself gently to the ground - not land on my right foot - but in general, my toe wasn't too much different after riding. It still hurt. And what a great ride! Heck, I even think I might have been able to do a 50 on Sunday.

Huh - that's the last time I'm letting a little smashed toe stop me from riding in an endurance ride. I can rest my toes when I die!
Posted by The Equestrian Vagabond at 1:58 PM