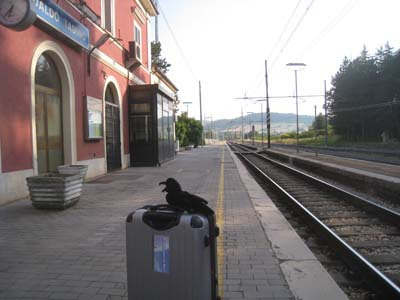 I was headed by train from Milan to Gubbio, where Italian endurance rider Fausto Fiorucci was picking me up at the statzione.

I missed the first train at 9 AM, because it was full, so I got on the next one 2 hours later. I called Fausto to let him know. Six hours later, I was almost at Gubbio... but the train stopped in the station just before Gubbio, and it just sat there, for 20 minutes, doing nothing. So after coming two hours later than planned, now I'm 20 minutes late.

We finally got moving, and in 15 minutes were coming into Gubbio. I have a habit I follow when riding trains - get off the train the same door you that got on. I gathered my bags, and headed back to the door from which I entered the train, and there waited with another Italian couple for the train to come to a stop. I saw Fausto on a bench waiting, talking on his cell phone.

The train stops. We push the door button. Nothing happens. We push it again. Nothing. We start pounding on the button in a panic - nothing! We look at each other in bewildered panic. Bloody hell! We grab our bags and run through the train car to the next exit door, and push the button. The door starts to open - just as the whistle sounds and all the train doors slam shut and the train starts moving! Oh no! I see Fausto get up, frowning, starting to walk away, because I didn't get off the train. I start slamming on the window and yelling, "FAUSTO!" but he doesn't hear me. AHHH! The three of us look at each other - we are stuck on the train! This is like the start of a Stephen King novel!

I called Fausto on my phone, but could only leave a message, "I was on the train! I saw you! But we couldn't get off! I guess I will get off at the next station and hop the next train back to Gubbio." The couple decided the same thing - and that is when we noticed that one of the doors had a sticker with a slash across the picture of a person stepping off the train. "No uscita" - no exit. On the other side, no such picture; you can exit through that door. The only problem with that is, unless you are familiar with the local station stops, you don't know which side of the train you must exit from! "Ay, Mama Mia!" they exclaimed. Mama indeed!

We start to get worried as, 6 minutes later, the train starts slowing down for the next station. If our exit is on the left side of the train (which Gubbio was not), we are OK. If our exit is on the right side of the train, we can't get out this end of the car; it would have to be out a door at the other end - we won't make it again. We are at both door windows, craning our necks to try to see which side the platform is on... and we luck out. The platform is on our left, and we can exit the left door.

We stumble out at a tiny, abandoned station. You can't even buy a ticket here if you need one. And the next train back to Gubbio is not for another hour. Where is Steph, to fall on the floor laughing with? This IS funny, right?

Well? What can you do. I called Fausto - who had to leave and go to his office for a patient (he's a dentist) - and told him I'd be back in Gubbio in an hour.

I eventually made it back there, and I think Fausto saw the humor in the story when I explained it later. I wasn't quite sure yet that I did, since I inconvenienced someone else.

But of course, the Raven found the whole adventure amusing.
Posted by The Equestrian Vagabond at 7:55 AM